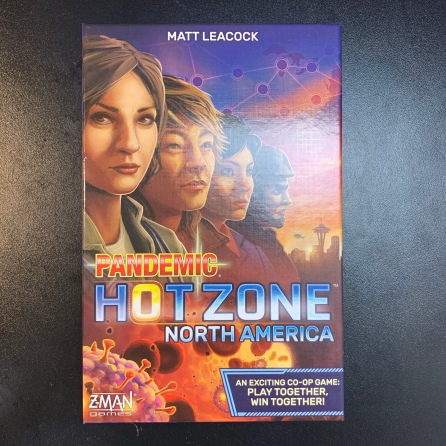 Right now is a strange time for the Pandemic series of board games. Based on scenarios that occur in a fictional future or historical past, its core premise is the current nightmare of our planet. And oddly, it’s also ignited sales for a franchise that was already one of the best-selling in all of tabletop gaming.

Though it might seem in poor taste for Z-Man games to have released Pandemic: Hot Zone – North America just as our real-life pandemic took its grip on the western world, I personally believe that the timing was an unfortunate coincidence. At the very least, players can experience the game for themselves for free with their print-and-play option. For those who get a physical copy, here’s what you’re in for. 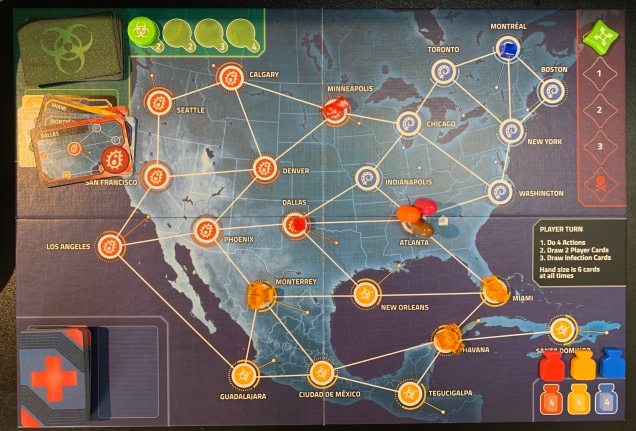 Pandemic: Hot Zone – North America is a scaled-down version of the original in terms of physical footprint and complexity. Similar to Ticket to Ride: New York, this adaptation is meant as a more bite-sized experience. It also doubles as a even easier entry point for newcomers.

This time around, there are three diseases raging through North America. Your team of two-to-four members of the CDC must work together to minimize the spread while also developing cures. However, if you lose control of the spread or you run out of time, North America enters into a pandemic and you lose. Reflecting on where the world is now, we found ourselves in this exact predicament and lost. But I digress. 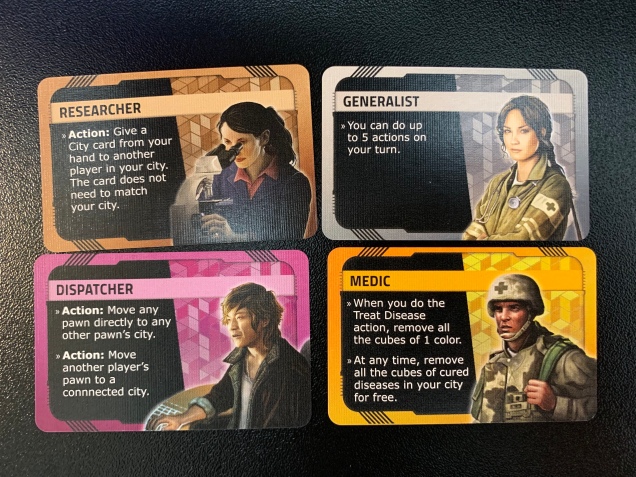 Each player will assume one of the four available roles. The Researcher is able to share information more freely than the others. The Dispatcher can move other pawns around the board. The fan-favourite Medic is the most efficient at treating diseases. Last but not least is my personal favourite, the Generalist. They get one extra action per turn, making them an all-around great choice. Regardless of what combination of roles are in use, it’s in everyone’s best interest to leverage each role’s strengths to improve your odds at winning.

Once the game begins, players will take turns moving around the board, removing disease cubes from infected cities, and working on a cure by collecting cards corresponding to the colours of each disease. Submitting four cards of the same colour will cure that disease. Can you cure all three before the game ends?

While you work towards a cure, each disease will continue to spread between turns. Epidemics will occur, causing an immediate spike in a new city. If more than three cubes enter a city, an outbreak is triggered, spreading a cube to each connected city. If you run out of player cards, run out of cubes, or your outbreak track hits four, you lose.

Much of this should sound familiar to experienced players. While there are minor tweaks to certain rules, the adjustments are so minor that you can immediately roll right in. While I think the original Pandemic is just fine for newcomers, Hot Zone takes things down a notch, making it even easier to grasp.

This iteration of Pandemic retains much of what makes the original so great, from its emphasis on teamwork to the drama created by the diseases spreading. However, veterans will notice that the new game is surprisingly easy when played straight up. If you’re looking for a challenge fitting for experienced players, I strongly recommend adding all of the new Crisis cards to the player deck. When drawn, these cards trigger negative effects, such as shortening hand limits or increasing the spread of diseases. One particular Crisis card causes the infection phase to occur twice-in-a-row. If you draw that card when the infection track is at four, it’s almost certainly game over!

Pandemic: Hot Zone – North America is a great game by virtue of being a slightly-different version of a great game. Its adjustments make for a title that delivers essentially the same thrills in a notably smaller box while also being a bit easier for newbies to learn. Its run-time is a smidgen quicker than the original, though it’s not snappy enough to snugly fit into your rotation as a filler title. Certainly a game worth playing, though it may not be a must-buy if you aren’t in the market for a somewhat-simplified version that’s small enough to fit in a large purse.

Though the default difficulty certainly takes a hit compared to other games in the series, playing with all of the Crisis cards brings the challenge up to something that more closely resembles its source material. If you’ve already played another game in the series, use them to ramp up the difficulty to something that more resembles what you’re used to.