In overly-reductive terms, Hades is the tale of an angsty son from a broken home who wants to move in with mom. The problem is that his dad is basically the devil and he lives in Hell. This is awkward.

Created by Supergiant Games – best known for their work on Bastion – Hades is an action Roguelite played from an isometric perspective. Your goal as Zagreus is to ascend the depths of the underworld. Doing so won’t be easy, as a throng of monsters and underlings are hell-bent on taking you down. Furthermore, the rooms are randomized to make it impossible for Zagreus to follow the same build order every time.

The odds aren’t in your favour at the start, but Zagreus isn’t going down easy. He enters the battle with one of six weapons, each of which caters towards a unique style of play. On one extreme, Zagreus can strike his foes with vicious claws with little reach. On the other, he can shoot foes from a distance with a bow and arrow while sacrificing the ability to land quick hits. I felt immediately at home with the claws and the shield, but they’re all fun to use and eventually master.

Zagreus is also armed with a Cast; a ranged magic spell that weakens enemy defences. Certainly a potent tool in his arsenal, but one with a number of interesting restrictions that will dictate your approach to each battle. Last but not least, he possesses the ability to dash in short spurts. You will mash the dash button a ton as a means of evading attacks and landing backstabs for bonus damage.

Armed with these abilities, you’ll fight your way through each layer of the underworld. One room at a time, you’ll slay all of the enemies within. Combat is frenetic, as the swarms of enemies and projectiles force Zagreus to be constantly on the move. Though it can be incredibly easy to slip into button-mashing – especially when Zagreus is boosted with a number of boons – the game greatly rewards precision play. Mastering the art of war will allow you to mercilessly plow through the competition in the way that a god like Zagreus should. Combat is exciting and constantly evolving thanks to the game’s weapon variety and the slew of power-ups that you’ll unlock along the way.

Eventually, you’ll reach the boss of a floor that you’ll need to defeat before moving to the next level. The general progression of how you ascend from the underworld is the same, but the rooms and perks within each level are shuffled between runs.

Some of these perks come in the form of boons from a Greek god. While every god can buff every aspect of your skillset, they do so in different ways. For instance, Zeus adds a lightning perk to your moves, which allows for attacks to conjure lightning and chain attack nearby foes. Many of Poseidon’s upgrades knock enemies back. Hermes can boost your overall speed of movement or the speed of your attacks among many other speed-based perks.

Other rewards include currency for buffs that only pertain to this run and other items that unlock permanent upgrades that don’t disappear after you die. Speaking of which, death is inevitable in Hades. There’s no shame in that! With this being an action Roguelite, death is a part of the process.

Softening the blow of each unsuccessful run are items that strengthen you for future runs. Spending purple gems called Darkness in the hub world gives you permanent buffs to your abilities. Gemstones allow you to open up new rooms that can provide health or other benefits. Keys unlock new weapons and new perks. Nectar is the most interesting of all, as giving it to NPCs not only grants you with swappable perks, but they also help you improve your relationships with NPCs. The better you get to know an NPC, the more of the story you’ll unlock.

For a genre where level randomization usually makes it difficult to tell a rich story, Hades overcomes the odds spectacularly. Constant dialogue between Zagreus and the NPCs does a phenomenal job of not only providing context to the action. Despite talking to these characters many times over, the dialogue evolves as you progress further north of the underworld. During key moments, “cutscenes” are used to great effect to shed a light on the events leading up to the start of the game. If you want to dive even deeper into the lore, you can read the codex entries that are opened after giving NPCs nectar. Even if you want to ignore the codex entries, you get an incredible amount of quality story beats through natural play.

Other aspects of the game’s presentation are equally stellar. Beautiful art direction gives Hades a distinct hand-drawn look that almost feels like a comic come to life. Save for a few technical hitches such as a handful of pixelated enemies and slight frame rate hitches on the Nintendo Switch version of the game, it’s a stunner to look at. Would be remiss without a nod to the game’s brilliant soundtrack. Equal parts moody and metal, its melodic strings and raging guitars perfectly underscore each moment. 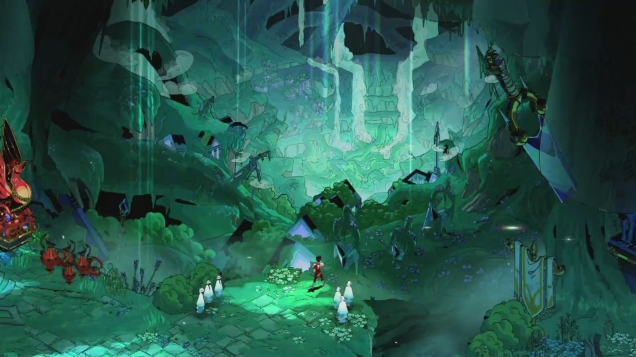 By combining airtight action, a brilliant progression system, and wonderful presentation, Hades is a masterpiece. I absolutely adored my time with the game and struggle to find fault in anything that it tries to do. It is certainly one of the best games of this year and one you should go out of your way to experience.