Sometimes, wacky Nintendo is the best Nintendo. From the Wario Ware series, to Elite Beat Agents, to the world-shifting Wii Sports, their free-thinking approach can blaze the trail for others to follow. On the other side of that same coin are duds like Wii Music, the Wii U, or the e-Reader; ideas that couldn’t overcome their own insanity. By virtue of including cardboard into the mix, the Nintendo Labo put itself on the fast track to one of those two extremes.

Having now made and played with three of the five Toy-Cons in the Variety Kit, I think I have a better idea of where it fits on that scale.

END_OF_DOCUMENT_TOKEN_TO_BE_REPLACED

My family and friends actually spoiled me with two Nintendo Labo Variety Kits. One got exchanged for something else, but I still have one ready to rock! Looking forward to trying this out to see if Nintendo’s latest creation is the next big thing! Stay tuned! 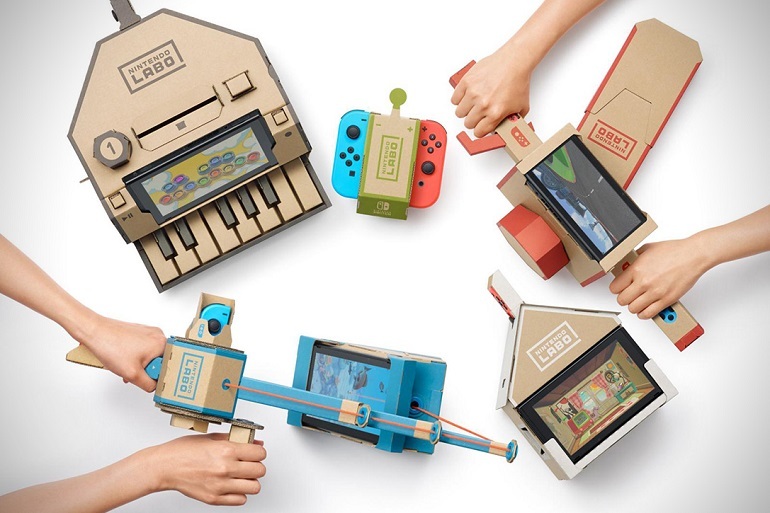 Nintendo Labo aims to create entertaining new video game experiences with the latest in cardboard technology. Specifically targeted for children, these experiences don’t appeal to me beyond my general curiousity of the tech. However, I hope that kids of all ages have fun with their future cardboard creations!

In a world where companies are racing towards 4K resolutions and virtual reality, Nintendo’s next technological innovation is…cardboard.

Nintendo Labo is a line of kid-focused games that incorporate the use of cardboard in a variety of different ways. In the example video shown, cardboard is used to make a piano, where the tablet sits in the middle. There’s a bug with Joy Con controllers on the sides that moves through HD rumble and inputs from the tablet. The most insane example is a full-on cardboard mech suit with a headset to mount the screen directly in front of your face.