Leaving Olympus behind, we find Kratos now living in the world of Midgard. More than just a change of scenery and a new beard, Kratos has grown up. No longer overcome with rage, he keeps his feelings in check, only fighting for a greater cause. In this case, he’s fighting to complete his wife’s last wish and protect his son, Atreus.

Young, well-versed in other languages, but weak on the battlefield and also struggling to find his place in the world, Kratos strives to be a great father figure for Atreus. From protecting his son in combat, to providing fatherly advice during down time, it’s a lot easier to connect with him as a player when he’s not a mass murderer driven by blind rage. Oftentimes, his words of wisdom are directly in line with the events of previous games, indicating that he’s learned from his mistakes and wants his son to be better than him.

Together, their quest begins shortly after the passing of Kratos’ wife and Atreus’ mother. Wanting to honour her final wish of having her ashes spread at the top of the highest mountain, they set off to do just that. Of course, the road is filled with monsters, but elements of Kratos’ past come back to haunt him along the way.

This new God of War game takes a massive shift in its structure. Formerly driven by twitch action, the primary thrust of the experience is its finely-crafted story that will make you feel a whole host of emotions throughout. By the end, I felt more emotionally connected to Kratos than I ever did across any of his previous outings.

Beyond having the ongoing banter between the two protagonists and strategically-placed story beats throughout, the game is structured in such a way that it’s presented as one continuous shot. Unless you’re noodling with menus, you’re always in this cinematic experience that is probably the best looking video game to-date. 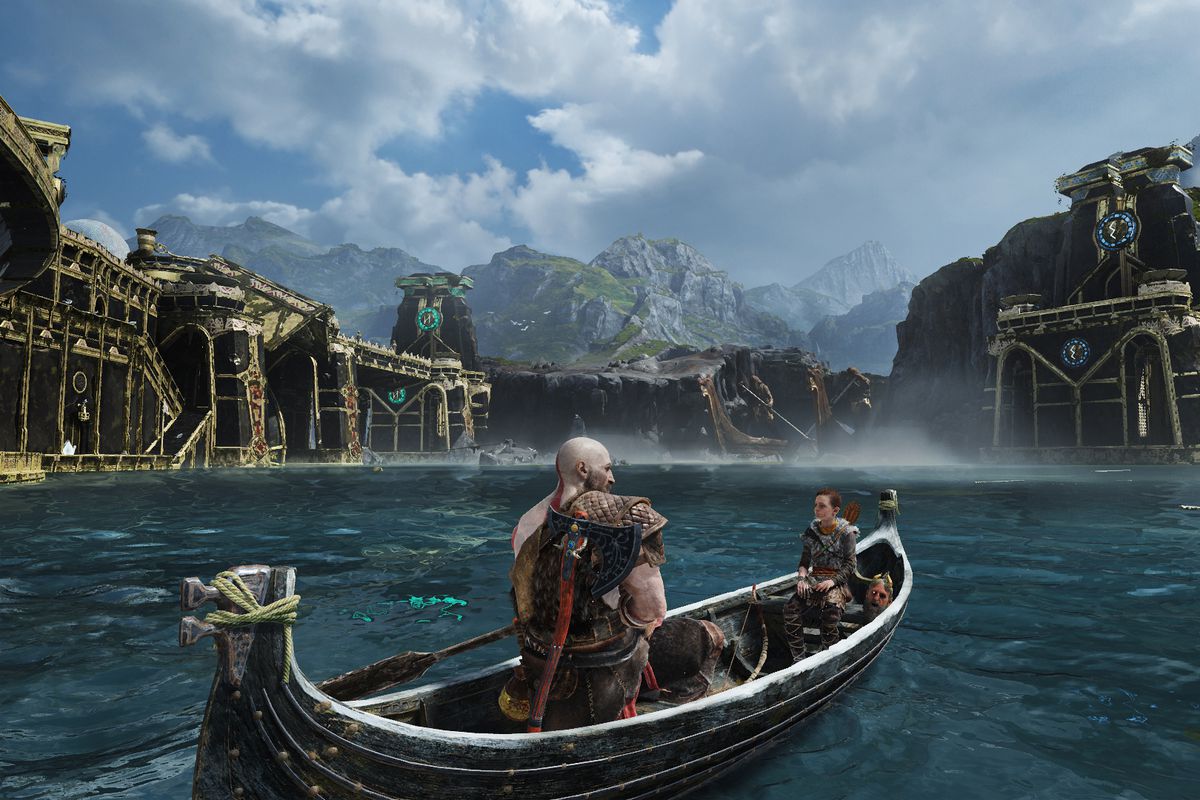 The action itself may have a secondary role, but there’s certainly a lot of it and it’s very well done. Kratos still fights hoards of enemies while finishing them off in dramatic fashion, but he does so with a different approach. To start, he fights with a Mjolnir-like axe that can be thrown as a projectile and recalled at will. Besides looking cool and being fun to use, it allows for him to create really cool combos while allowing for new types of environmental puzzles. On top of that, Atreus is a helpful companion whom you can use to fire arrows as a means of going aggro or extending combos. I struggled to master the combat engine’s intricacies, but I was able to slug my way through the campaign on normal difficulty.

Over time, you will unlock items to make your weapons and armour stronger, as well as new techniques to fillet your foes into a bloody mess. I wish the game did a bit more to teach you how this aspect of the game works, and I wish they got to it sooner. The way the game is structured, there’s about 3-4 hours of being driven down a fairly linear path, and then all of a sudden the game’s world and character growth structures bloom in an instant. I think it would have benefitted the experience to give players a bit more to chew on early to keep their motivation high.

It’s also worth noting that the world Kratos and Atreus venture through is a joy to explore. No longer a fully-linear game, Kratos does have the ability to explore a bit more for items and side quests. In this sense, it’s more like Rise of the Tomb Raider or in more traditional terms, Metroid in its structure, which is a welcome change. Giving players the ability and incentives to roam around these environments really adds to the scale of this adventure, making it far grander than anything you’ve played in a previous entry in the series.

Welcome back, Kratos. The new God of War serves as a testament that old dogs, er, gods, can learn new tricks. By taking the risk of rethinking everything that defined the series, this new entry actually takes the franchise to new heights. This is not only game of the year material, but it will probably stand tall as one of the best in this generation.