Numbers are great. They help us quantify what we have and what we aim to achieve. But numbers aren’t everything.

When In Third Person launched a decade ago, I made it a point to not use numbers as the primary measure of success. Part of that was out of necessity. It’s easy to fret over pageviews when you don’t generate any.

But more importantly, this is a creative medium where the success that comes from the work one creates isn’t entirely defined by pageviews, clicks, or ad revenue. Factors such as (but not limited to) the quality of the work, the satisfaction felt from releasing those ideas out into the world, and the impact the work has on others are some of the intangible things that can mean a whole lot. Whatever that quantitative and qualitative mix is, success is usually a balance.

Finding that balance is difficult. It always changes from day-to-day, from one piece of creative work to the next, to whatever mood you happen to be in at the time. In recent months, I lost hold of the balance while chasing a particular streaming goal. I’m on the precipice of finally reaching that goal, but I’m not proud of how I lost myself along the way.

About a year before I started seriously streaming on Twitch, I floundered on Facebook Live and YouTube. Partly because those are platforms that don’t have the infrastructure or the audience to support game streaming like Twitch does. But most of the blame falls on my shoulders. From poor production quality, to awkward commentary, to no promotion, of course no one gave a damn about my broadcast. Streaming at the level I was back then probably would have bombed on Twitch as well.

When I decided to switch to Twitch, I learned of its affiliate program. By achieving certain performance benchmarks, you unlock the ability to receive monetary donations and subscriptions from viewers among other benefits. Being able to make money off of streaming sounds like the dream, but having come off of a year where no one watched mine, working towards Twitch Affiliate status didn’t seem like a realistic goal.

Instead, I focused on sorting out my production quality issues. Around the time I started using Twitch seriously, I had gotten a hand-me-down desktop computer from work that was more capable than my old laptop. Regardless of how few people watched, my time online was in service of testing out my new equipment, noodling with my settings, and attempting to squash new issues as they arose in hopes of putting on a better show tomorrow. With the purchase of new gear, lots of homework, and lots of practice, the show eventually got to a level of production value that I was happy with. All in all, this took about a year to figure out.

Along the way, a lot of cool stuff happened. The stream opened the doors for my friends and former podcast buddies Mat and Jason to reunite for our new streaming show Boss Rush. Later on, Mat’s twin brother and my former college classmate Jon joined the roster. When we weren’t hosting the show, we were playing games with each other on stream. When the cameras weren’t on, we were (and still are) talking to each other daily in a group chat. We went a long time without talking to each other, so reestablishing the friendship has been incredible.

Streaming helped me make new friends as well. Will spare you the details on a story that’s been told many times before, but without it, I probably don’t cross paths with Kris and Rachel at Double Jump. We’ve been a tremendously positive force in each other’s lives, and I’m forever grateful to them for everything.

They’re not the only new friends I’ve made. Being able to hang out with those in the chat has been fantastic. Whether we’re shooting the breeze about hip-hop music, exotic meats, mental health, family lives, progress towards your life goals, or wherever the conversation may go, I’m honoured to be someone you’ll share these stories and conversations with. Seeing people come back makes me feel like we’re all in this adventure together.

Can’t forget Extra Life. Using the platform to raise money for the Children’s Miracle Network, we raised so much money for a great cause and had a wonderful time doing it. Being able to make a positive impact on the world like that will stand as one of the best things I’ve ever contributed to society.

Through it all, the channel started to build momentum. One-by-one, I started checking off all of the requirements needed to unlock Twitch Affiliate. The notion that this one seemingly out-of-reach mission was becoming more attainable got me excited. Though I never had much ambition for turning streaming into a full-time career or anything like that, being able to hit such a milestone would have been a testament to all of the hard work to get to this point. Eventually, the channel grew to a point where it was just one goal and one stream away from unlocking Affiliate status. I didn’t want to jinx anything, but I was excited at the notion that it was going to happen right then.

Viewership that day wasn’t what I needed to push it over the top. Nor was it the next day, or the day after that. In fact, my numbers took such a nosedive in the following months that it set me back tremendously.

All of a sudden, this goal I wasn’t even actively gunning for in the first place hung over me like a rain cloud. Everything great that had occurred up until this point was pushed to the wayside as I fixated on one number that kept falling.

The notion that this once impossible goal was right in front of my face and I watch it slip away hurt like hell. Didn’t even want it for the money or the recognition. I just wanted it because it used to seem so far away and I almost had it. Not having it sent me into a depressive state that just ate at me. Not even just while I was streaming. I’d just be lying in bed awake at night, wondering if I was a fraud all along.

Jealousy also started to seep in. While I have nothing but respect for all creators out there, and I understand that the success of others has nothing to do with my own failures, it has been difficult to separate the two. Trying to prevent myself from villainizing others in this situation has only added to the strain. Deep down in my heart, I want all creators to succeed. My head has just struggled to sort out the negative energy created by this situation.

In hindsight, the part that hurt most was the feeling that everything I had done was a waste. That isn’t true in the slightest, but I was so overcome with negative energy from not unlocking Affiliate that it made me look at those wonderful moments in a different light. To think that I even felt this way for even a moment kind of grosses me out. The balance in my head had swung so far towards the numbers side that I was losing sight of the moments that really mattered the most. 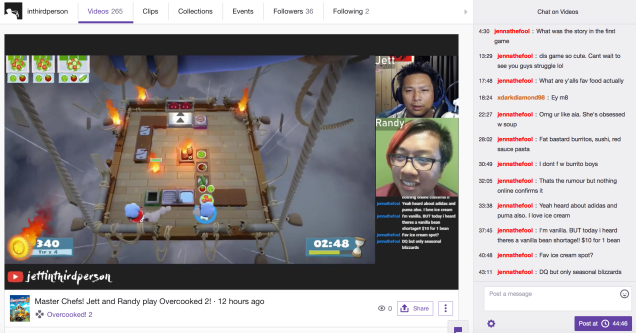 It’s taken me a long time to stop moping about and confront my feelings on the matter. This is not the viewers’ fault for “bailing” on me. It’s not the fault of other streamers who “took” views away from me. I didn’t reach the goal because I did a bad job of trying to reach this goal.

It’s my fault because I didn’t make a plan for how to reach Twitch Affiliate. It wasn’t on my mind until it was right in my face. When the moment came, I wasn’t ready to snag it. Even after that, the numbers slid because I wasn’t ready to work for it. Was really hoping after that first encounter that I would just stumble on it. Going about it as I always had only made things worse.

What I really had to do was accept the fact that I was ready to work to get Twitch Affiliate. This wasn’t going to just happen for me. I would have to adjust my approach to get there. One aspect that had to change was my scheduling. If the goal is to build an audience that will come back, I have to make it easier for people to find me. My random weekend-morning streams or Friday nights at midnight streams weren’t going to cut it.

I’m sticking to a much more familiar and reasonable schedule now. I’ve taken more steps to promote upcoming streams. Also, I’ve been more mindful of the games I play, as being buried on the search results list on Twitch by playing a popular game is a very real problem.

Did any of it work? I don’t know for certain. What I do know is, as of right now, I’m 0.1 away from hitting my goal and finally achieving Twitch Affiliate. Going to try and reach it tonight with the latest episode of Boss Rush. Hope you can join us tonight at 8:15pm EST at twitch.tv/inthirdperson for an entertaining show and to help me push past the final goal post! If I get it, that’s amazing! If I don’t that’s okay too! I’ve now put in the time to think about either outcome and have plans in place to make it happen today, tomorrow, or whenever.

And if for some reason it never happens, I’m ready to deal with that too. Coming up short on a number doesn’t invalidate everything that’s taken place up until this point or the great times to come. I’ve given this project everything that I have, and I should always be proud of the effort regardless of where it goes. Also, the friendships, the memories, the knowledge, the experience, the greater impact on the world…it all matters. If anything, it’s more special than whatever unlocking Affiliate will get me. Thank you for the good times so far and the fun we’ll have in the future! Hope to see you tonight!

7 thoughts on “Twitch, the Road to Affiliate, and Losing Myself in the Chase for Numbers”