After creating the masterpiece that is Yoshi’s Island, Nintendo decided to take the Yoshi platforming games in a different direction. Starting with Yoshi’s Story and continuing with Yoshi’s Wooly World, the difficulty of these titles were seemingly toned down to reach a younger or more casual audience. While I don’t think there’s anything fundamentally wrong with that approach, Nintendo’s execution of the concept has left a lot of room for improvement.

Yoshi’s Story is a snooze for level designs that are completely devoid of anything interesting to do. Yoshi’s Wooly World makes some improvements thanks to its charming art style and a solid back half, but the first half of that game also equates accessibility with pedestrian level design. Did Nintendo finally bridge the gap between fun and accessibility with Yoshi’s Crafted World?

Crafted World takes Yoshi into the next dimension. While it’s not a fully 3D experience, Yoshi can move along paths that go into the screen. Yoshi can also shoot eggs to hit targets in the foreground or background. The added depth certainly gives the game a distinct look on top of its elementary school art project art direction. There’s one scene where a train is spiraling upwards and it looked really neat. In other moments, you’re required to search more open-ended spaces for objects to complete a train or a bridge to move forward. It’s a nice touch to be able to move along a slightly-less linear path.

While I would stop short of calling the 3D elements of the game a revelation, what ultimately sets Crafted World apart from its precursors is in its level design as a whole. From one stage to the next, the game goes out of its way to give you some unique design concept to play with. In one level, you traversing through the depths of a fake ocean, filled with paper fish on sticks swimming about. In another, you’re riding on a train, playing a shooting gallery with targets to hit at long distances. One memorable boss fight requires you to shuffle rooms around in order to create a clear path to bonk the boss on the head. One of my favourite mechanics is the magnet, where Yoshi must attach the magnets to metal objects in order to use them as platforms or weights.

Along the way, the coins you collect can be cashed in for costumes. At certain points of the map, you can buy costumes local to that area from a vending machine. There are different tiers of costumes as well, but fear not. None of these can be purchased with real money and it’s not too hard to unlock them all if you play enough. Besides being able to dress Yoshi up as a coffee creamer, house, or rhino, they add extra hit points to Yoshi. While the game isn’t particularly difficult, it’s another way to have fun in this Crafted World.

If you plow through the main campaign, you can easily be finished in a handful of hours. But if you want more out of the experience, Nintendo has introduced a neat Flip Side mode. After you beat a stage, you can play it again starting from the end and working your way to the start. 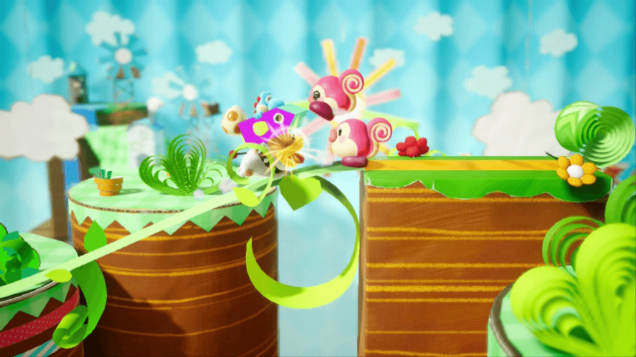 What makes this mode unique is that it also flips the camera perspective, making the stage as a whole look different from the way you played it the first time. On top of that, you’re also playing the level to collect Poochy pups as part of a timed challenge. It’s not the equivalent of getting two whole campaigns, but it’s a nice way to squeeze more out of the experience without feeling overly repetitive.

Yoshi’s Crafted World succeeds where its predecessors failed by finding a better balance between fun and accessibility. Even though most of the game wasn’t much of a challenge, it was a pleasure to jump, shoot, and explore its creative worlds. I will forever long for a true sequel to Yoshi’s Island, but I’m glad that Nintendo finally got the formula for this style of Yoshi game right with this one.