Life at BioWare has been pretty rocky. Despite being a great game overall, the fallout over Mass Effect 3‘s disappointing endings was one of the biggest news stories of that year. Then, Mass Effect: Andromeda was released a few years later to much criticism. Falling well short of expectations in terms of critical acclaim and sales, I’m concerned that we might never see Mass Effect again after that debacle.

This time, the studio left Shepard behind to tell an all-new adventure in Anthem. It’s also a very different type of game. Leaving much of the choose-your-own-adventure elements behind, this game is a looter shooter in the style of Destiny.

Anthem may not have a story as involved or as in-depth as their previous games, but to dismiss what’s here would be selling the game short. In the early stages of the game, it does a great job setting up the lore around what The Anthem of Creation is and how humanity is in a bad spot. Should you so choose, you can have a lot of great conversations with NPCs in Fort Tarsis or pick up numerous codexes strewn about. Also, throughout each mission, voice chatter between characters is used to great effect to try and give the action some context. There’s definitely more lore here than your standard action game.

Having said that, it’s still not enough to mask the game’s rigid level structure. At the start of a mission, you go to a place, shoot things, go to another place, shoot things, go to a final place, shoot the things there, then you’re done. Admittedly, I’m being reductive here, but it becomes pretty clear that you’re doing the same thing throughout the game. More story-driven moments within each level beyond dropping in the odd cutscene or the frequent mid-mission fetch quests would go a long way towards giving the moment-to-moment action more life. Otherwise, it’s fairly easy for levels to blur into each other.

What ultimately caused me to fall off the game were the Tombs of the Legionnaires missions. Ripping you out of the main story in order to grind through a laundry list of tasks in the free play mode, it really felt like its only reason for existence was to pad out the campaign’s length. Though I traded the game in already, it turns out there isn’t much more to the main story after that. I probably should have just kept the game until the campaign was complete, but oh well.

Not to say that the game isn’t without merit. It truly shines in its combat. Enemies gang up on your squad in big numbers. Over the course of the game, you’ll run into tougher enemies with unique attack patterns, but each encounter always feels large. At the default difficulty setting, you shouldn’t have a problem mowing down the opposition without much issue. However, at the higher difficulty levels, squad composition and coordination really make the game shine.

You start the game out with the Ranger Javelin, but will get to unlock three more as the campaign progresses. Each class has its unique set of abilities, as well as an ultimate. I personally love playing as Storm, whose essentially a cyber mage. Can die at the drop of a hat, but their access to elemental powers like large bursts of fire or lightning bolts that can knock down a dozen enemies at once are a blast to use. The Interceptor is a lot of fun too, as they’re basically a cyber ninja who excels in melee combat. Being able to coordinate each Javelin’s abilities to create massive combos goes a long way towards giving the combat some much-needed weight.

Flying isn’t as critical during battle, but it’s a really fun tool to have for traversal. Most of the time, you’ll be using it to travel from one place to the next. Being able to rocket into the air, hover for a moment to take a few shots at an enemy, before dive-bombing to the ground is really satisfying. Though traveling between battle arenas feels forced, at least it’s a lot of fun to get around.

Anthem has elements of a great game baked into it. I can see how the game has built a bit of a cult following around it for the things it does right. Large battles with heroes of different classes makes for a lot of exciting moments, while flying is just a treat. However, its cookie-cutter mission structure and repetitiveness bog the experience down a great deal. If EA and BioWare have plans to support this game for the long haul, I can see a world where it fully realizes its vision. Right now though, it feels a bit too half-baked for my liking. 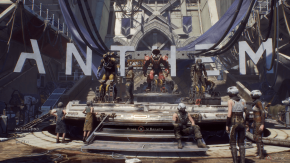