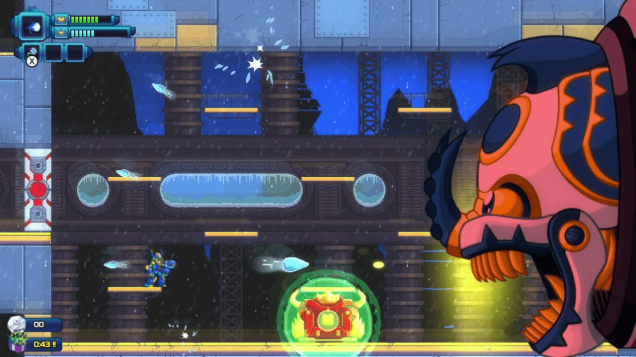 You know the drill when it comes to your standard issue Mega Man games. Starting with nothing but your basic blaster, you choose to tackle the eight robot masters in any order. Along the way, you’ll gain their weapons and other upgrades until you’re a walking Swiss Army Knife. The moment-to-moment gameplay feels like you’re playing a lost Blue Bomber adventure.

However, 20XX deviates in dramatic fashion by being a “Rouge-lite” style of game. Your goal is to venture from one randomly-generated level to the next, taking out all of the bosses with only one life. If you die, you go all the way back to the beginning while losing almost everything in the process. The only thing you can take back are Soul Chips, which allow you to buy temporary and permanent upgrades for future runs. 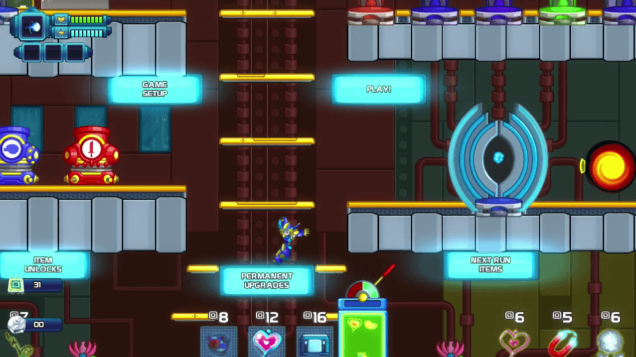 It took me a while to adjust to the game’s structure. The “Roguelike” and “Rogue-lite” genres are fairly alien to me, as the only game I’ve ever really played with those elements was Into the Breach. However, once I got into its rhythm, there was a lot to like with this change of pace.

To start, you’ll be dropped into one of the eight random levels. The layout is different each time, giving you reason to play again. While the randomly-generated nature of its design doesn’t always create the most exciting or fair levels, trekking your way through is a thrill more often than not.

Resources become a huge deal along the way. You’ll collect nuts, which can be spent at vending machines and at shops for immediate health and energy capsules, as well as power-ups that can increase your speed, strength, or max health among others. At times, you may be in dire need of health and have the opportunity to buy more at a vending station. However, the allure of possibly getting health packs for free could make you decide to pocket your nuts for something else later on. If you dig deep enough, you might even find a sketchy laboratory that will give you immense power in exchange for a hefty sacrifice. 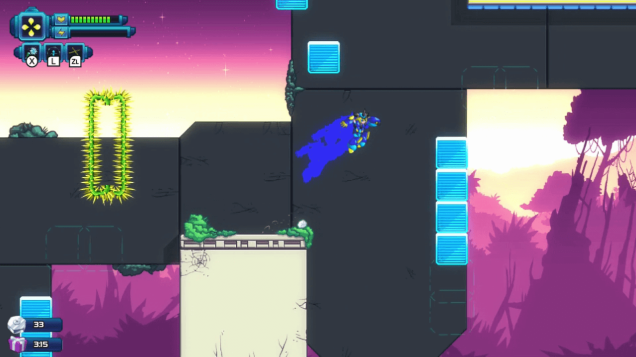 There are other suit-altering upgrades you can find (or miss) that can dramatically change the experience. In one run, I found an upgrade that allowed my main blaster to shoot in four directions at once. This made certain bosses much easier to deal with, as well as scramble situations where I was surrounded by enemies. I’ve also unlocked boots that give me the ability to double jump. The fact that you can miss or actively avoid all of these during your runs gives the game yet another variable to manage.

As the icing on the cake, you can play the game in co-op locally or online. Your camera is intentionally zoomed out in order to facilitate two characters on-screen at once. It’s neat to be able to play the game as a duo, but the camera remains zoomed out even for solo play. As of writing, I haven’t had a chance to try out the co-op just yet. Will try and update the review with impressions on that mode if I get the chance to, but I think the game can be enjoyed a great deal even without it. 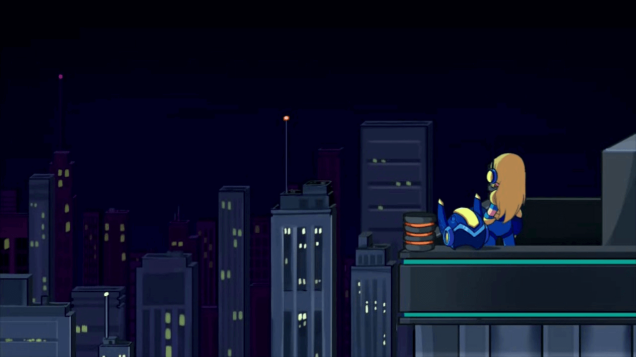 Even in a post Mega Man 11 world, 20XX carves out its own niche with some radical new ideas. Taking the core run-and-gun gameplay and fusing it with the underpinnings of a Rogue-lite works incredibly well most of the time. If at first you don’t succeed, dust yourself off and try again. And once you beat the campaign, try it again on a different difficulty setting with different characters!