(NOTE: This post contains mild spoilers for the first dungeon of Moonlighter)

Billed to me as part Legend of Zelda, part roguelike, and part management sim, Moonlighter has been on my radar for quite some time. However, due to life getting in the way, the only time I’ve had to play it was a one-week pocket of time between Super Mario Maker 2 and Fire Emblem: Three Houses.

Thus far, I really enjoy what I’ve played. Be that as it may, I’ve struggled to get a grip on playing the game the right way. It feels like I should be much farther along relative to the time I’ve spent with it.

Before diving into the details, let’s take a step back. In the world of Moonlighter, five doors to mysterious dungeons have appeared. While these dungeons are filled with treasures and other mysteries, they’re also swarming with deadly enemies. Adventurers have been trying for years to conquer them all, but none of have been able to do it.

All the while, a village was set up nearby called Rynoka to serve as a place for budding heroes to shop and stay the night. You play as Will, a shopkeeper in Rynoka. At night, you venture into the dungeons to gather items and someday complete them all. By day, you sell any excess items in your shop. With the money and extra materials you saved, you’ll invest it all into weapons, armor, potions, and other upgrades to help you get further with each trip.

It’s a really interesting gameplay loop that blends a number of different genres into one. Even so, I’ve stumbled out of the gate with a few missteps.

1. I bought the “wrong” stuff at certain times

After my first major payout, the first thing I bought was the Forge. By hiring the blacksmith, I could then create new weapons, upgrade existing weapons, and buy armour. As it turns out, weapons and armour are really expensive. Wasn’t in a position to afford anything in there until I made a few more trips into the first dungeon.

In hindsight, it would have been better for me to hire the witch first. With the ability to make health potions or enchant my weapons with boosted stats, I could have used potions to lengthen my dungeon runs without breaking the bank. Technically, a better sword could have also extended my stay, but that leads me to my second point.

2. It’s taken some time for me to get a feel for the combat

Moonlighter looks like a classic Legend of Zelda game, but it doesn’t quite play like one. Link swings his sword with a quick snap. Will in Moonlighter requires a bit more wind-up and recovery time. Because of this, there’s a greater emphasis on swiping at the appropriate times and from the right distance before rolling away to safety. It’s nowhere near as difficult as Dark Souls – a game that popularized this more methodical approach to combat – but it does require some getting used to.

This, combined with not having any armour and having little HP made for repeated runs that were well short of the goal. Within that first dungeon, there’s one particular item that will save me a ton of time in future runs. However, it’s taken me a few hours just to get that final floor to get the thing. 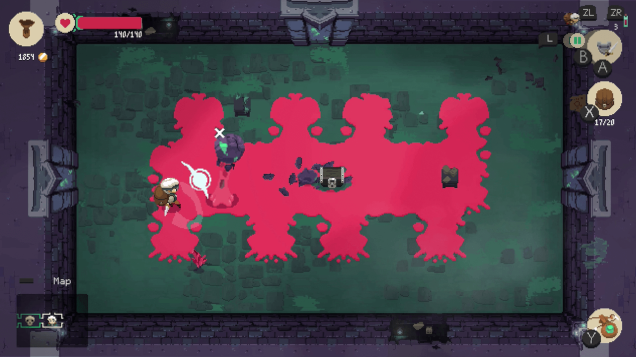 3. I misunderstood how to use the teleporter

This one is my fault. On the final floor of the first dungeon, you gain access to a teleporter. It’s very expensive to use, but it allows you to warp to a specific spot in a dungeon instead of starting from the beginning each time. I invested the last of my money to use it, but then started the next run at the start of the dungeon again. Wait, what?

What I didn’t know at the time, was that in order to warp back to that specific point, you have to re-enter the door that magically appears beside your shop to drop you off. It normally disappears right after, but it will re-appear at night to take you back. Not knowing this was the case, I went back through the front door of the dungeon and wasted the teleporter. Now I’m out a whole bunch of money and have to make at least one extra run in order to generate enough money to buy the supplies I’d need to finally beat the big boss at the end. 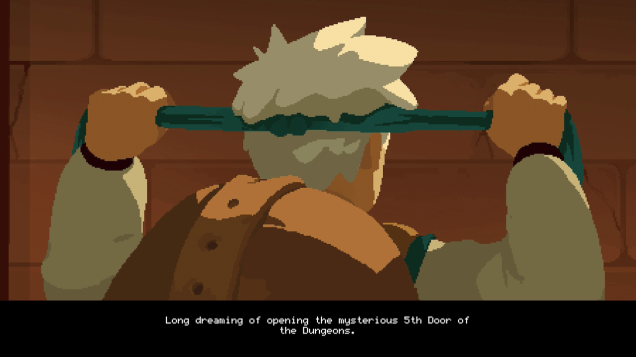 Every game has a learning curve. This one has just been a bit bumpier for me, and it’s not necessarily the game’s fault. Had I restarted now, I think I’d be much farther along than I currently am. Nevertheless, I’ve enjoyed what I’ve played of Moonlighter thus far and I think I’ve finally got a core understanding of how everything works.

‪What are you playing this weekend? I’m aiming to crack skulls in River City Girls!‬ ‪🎮‬ ‪👊‬ ‪#videogames #retrogame #ps4 #nintendo #nintendoswitch #indiegames #rivercitygirls‬
Who is your fave Ninja Turtle?‬ Not sure if they knew beforehand, but Kris and Rachel from @doublexjump sent me art of my fave hero in a half shell! ‪🗡‬ ‪🐢‬ ‪#tmnt #ninjaturtles #art #comics #gameroom‬ #leonardo #donatello #michaelangelo #raphael #videogames
‪My Hanzo clears the point with a flurry of arrows and a dragon as the icing on the cake!‬ ‪☠️☠️☠️☠️☠️‬ ‪#overwatch #highlights #ps4 #xboxone #nintendo #nintendoswitch #twitch #livestream‬
‪#airhornx3! Hitting dabs and jaws in River City Girls! Let’s clean up these streets together!‬ - ‪twitch.tv/inthirdperson‬ 🎮 👊 ‪#videogames #retrogame #ps4 #nintendo #nintendoswitch #indiegames #rivercitygirls‬
‪Animal Crossing: New Horizons takes centre stage in today’s video. With the game set for release next month, let’s indulge in the hype!‬ - ‪https://youtu.be/espHskJmypU‬ (link in bio) 🎮 🎮 ‪#animalcrossing #AnimalCrossingNewHorizon #nintendo #nintendoswitch #gaming‬
‪All aboard the Animal Crossing: New Horizons hype train! We’re talking all about it in tomorrow’s video! Subscribe to the channel and hit the bell to get first dibs!‬ - ‪youtube.com/inthirdperson‬ (link in profile) 🎮 🎮 ‪#animalcrossing #AnimalCrossingNewHorizon #nintendo #nintendoswitch #gaming‬