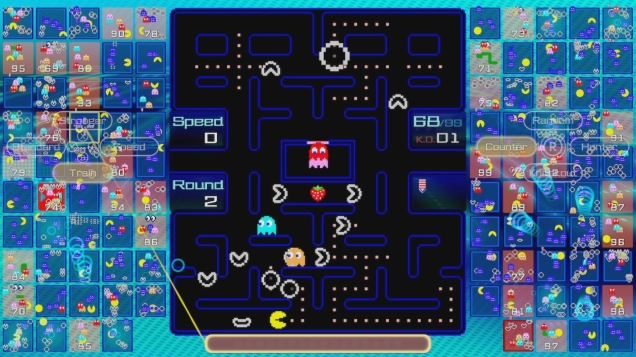 No longer a solitary experience, the latest strain of “Pac-Man Fever” is Pac-Man 99 on the Nintendo Switch. Similar to Tetris 99 and Super Mario Bros. 35 before it, the single-player experience of the classic eat ’em up is converted into a battle royale. Does the hungry puck have what it takes to excel in this multiplayer format?

The core of the game is rooted in the original. You weave Pac-Man through the maze while eating pellets and avoiding ghosts. That is, until you eat a power pellet, at which point the tables are turned and you can eat them, too. As you clear the map of pellets, the speed gets faster until you lose or you’re the last player standing.

All the while, 98 other players are simultaneously playing alongside of you. Though your view of their boards is tiny and a bit abstracted, you can keep tabs on how others are doing and watch players bow out as they lose.

As with Tetris 99 and Super Mario Bros. 35, players aren’t keeping to themselves. When you eat ghosts, you’ll send Jammers to your opposition. Jammers are white Pac-Men that slow down Pac-Man on contact. Later in the match, red Jammers can be sent, which are actually lethal. Though you’re free to target a specific opponent, I lean heavily on the right stick targeting system that allows you to pick between random opponents, the opponent with the most badges, the person closest to losing, or counter everyone attacking you.

If you’re familiar with Nintendo’s other battle royale games, it works exactly as you’d expect. If anything, its implementation here might be the best of the bunch. But if this is your first go-round, the game’s complete lack of instructions or tutorials make this a key detail you could miss. 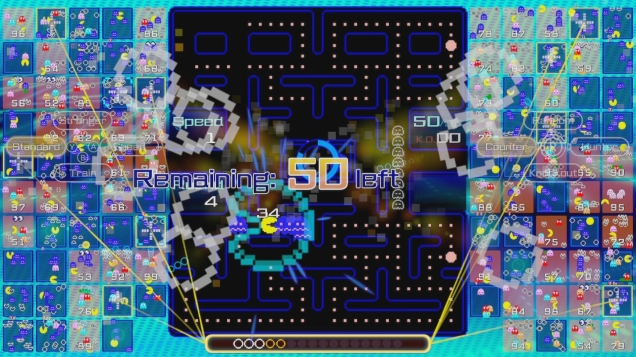 The game’s lack of instruction actually hurts this one more than the others. Pac-Man in-and-of-itself is the most straightforward of the bunch at a base level, but it introduces even more new mechanics beyond the targeting system.

New to this iteration are sleeping ghosts. These ghosts spawn in two rows when a fruit is eaten. These harmless ghosts can be eaten without consuming a power pellet. However, when they disappear, they’re appended to a ghost. When you next eat a power pellet, the entire chain of ghosts become edible, allowing you to create a satisfying buffet of ghosts to mercilessly eat through. The more ghosts you eat, the more Jammers you send!

You can actually add more sleeping ghosts to the mix by selecting Train from the left menu. Doing so adds more sleeping ghosts when you eat a power pellet, but each sleeping ghost you eat adds a Jammer to your board. Other abilities include speed, which makes you faster after eating a power pellet, but you send fewer Jammers for each eaten ghost. Last but not least is Strength, which doubles the amount of Jammers sent for each eaten ghost, but the pellet timer runs out incredibly quickly.

If you want to ignore all of this, you can simply set your perks to Standard. However, it’s in your best interest to learn when to activate each perk. Personally, I use Train to try and create long ghost chains and then trigger strength to gobble them all up.

These extra systems may lead to a screen that is difficult to read at times, but it also adds a welcome level of depth. Again, all of this nuance is easy to completely miss unless you search for a guide online due to the game’s lack of instructions.

What it lacks in guidance, Pac-Man 99 makes up for with a fast, exciting, and borderline-overly-chaotic battle royale. Pac-Man 99 does a great job of adapting this classic title for modern times and I think it’s another rare home run for Nintendo’s paid online subscription service. Now if only I weren’t awful at Pac-Man…