At a certain point in my streaming journey, I made a very important distinction for myself:

Making this adjustment has helped me manage managing my mental health while also putting myself in a better position to work towards my streaming goals. Here’s how I differentiate between the two and how I benefit.

While I mostly play video games on stream, I do both activities for different purposes. Playing video games is a personal activity I enjoy for myself. There is no pressure for me to put on a good show for an audience or pick specific games that are more likely to draw a crowd.

Streaming – like writing – I see as a form of content creation. I make content for the sake of creative fulfillment and the opportunity to use my voice to make a positive impact on the lives of others. Playing video games is one of many possible activities I do on stream, but my ultimate goal is to create content.

Making this distinction helps me in two key ways.

The entire streaming process is quite the time-sink for me. On top of just being live for hours at a time, there’s a lot of work I put in behind the scenes, from prepping all of the equipment, planning content ideas, and video editing after the fact to repurpose the streaming content for YouTube, Twitter, and Instagram. I simply don’t have the time to do all of these things if I were to stream every gaming session.

Instead, I pick my spots. Based on the workload I expect to come with each stream, I am comfortable with streaming two days a week. On certain weeks, I can do three, but three is certainly not sustainable for me at this point.

Not only does this help me ensure that I have the time that I need to create at the level that I want, but it also gives me time to just play games for the sake of playing games. Going through this process has taught me that not every gaming session needs to be an opportunity to create. If anything, streaming everything leads to me burning out and not having the energy to make great content. Therefore, gaming time and streaming time are two separate line items in my schedule.

While I spend much of my on-stream time playing video games, the primary focus of my content has little to do with my in-game exploits. There are no shortage of players who are better than me at the games I play. I’m also generally not one to take on unique challenge, such as speed runs, completing all in-game achievements, Nuzlocke challenges, or any other modifiers to spice things up. There are times when my in-game actions do drive the content, such as my strained romance between Haley and I in Stardew Valley. Even so, my gameplay is largely unremarkable relative to what’s out there and I’m okay with that. 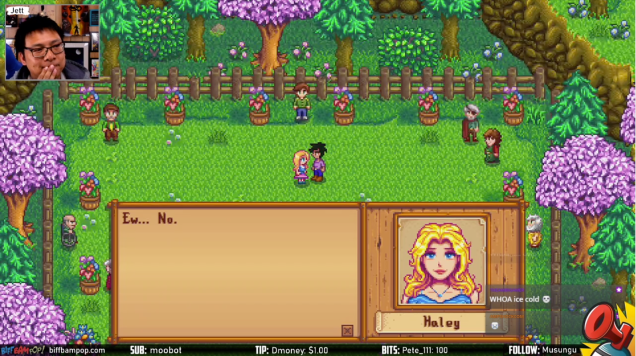 What I find most interesting to create and what viewers of my stream seem to like most about my stream is the stuff I add on top of the gameplay. This includes, but isn’t limited to:

When I stream, I’m not here to just play video games in front of an audience. I’m here to create a show that adds value to the lives of those who watch it through the entertainment I provide, the knowledge I share, and the engagement we create in this streamer/viewer dynamic.

Having that focus of creating a good show helps guide specific decisions I make throughout. For example, I make it a point to take viewers out of the gameplay entirely to chat. Sometimes I do so do a show & tell segment to talk about the latest geeky stuff I bought. Sometimes I do so to share a story. Sometimes on a random weeknight, we’ll just chat for hours after I’m done playing games about anything that comes to mind. Whatever the case may be, breaking up my gameplay segments with chatting segments adds more variety to my content and is exciting for me to present.

This focus also helps me gauge which games I want to play on stream. The reality is that part of my goals include running this show for an audience. I get a sense of satisfaction knowing that someone is watching this live and getting something positive out of the content I create. However, the games I stream on Twitch has an impact on the potential number of viewers that could drop by or discover the stream for the first time. 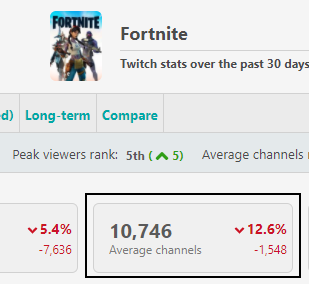 For example, streaming a saturated game like Fortnite that literally has 10,000 streamers going at any given time makes it physically impossible for viewers to find my channel within the Twitch directory. When I decided to stream Spider-Man around launch, my channel got buried by thousands of others who already had a bigger audience than me.

On the other end of the spectrum, streaming a game that no one else is streaming will likely net the same result, as empty categories are usually caused by a lack of interest among viewers. Tetris Effect is a fantastic game, but the Tetris community spends most of its time watching NES Tetris and Tetris 99.

Many of my game choices are driven by my desire to find the right balance between games that I want to play and which Twitch directories where viewers will most likely find me and enjoy my content. Tetris 99 is a staple on my channel not only because I like to play it, but because it draws an audience that wants to play Tetris with myself and dozens of others. It also doesn’t hurt that Tetris 99 is a smaller community and my stream is consistently near the top of the directory.

In recent months, Rogue Company has blown up to become arguably the most popular game I stream. Though it’s a much smaller shooter up against the likes of juggernauts such as Fortnite and Call of Duty, that game has an audience of viewers looking for streamers to watch. And unlike those shooter titans, Rogue Company doesn’t have massive streamers synonymous with the game yet. That allows for streamers like me to who love the game and put on a good show to draw consistently-higher numbers with it than I do with any other game.

Just being in “hot” categories isn’t enough. These games have to be ones that I excel in creating content with. In Tetris, I’m at least good enough to hang around until the very end while also winning a few matches here-and-there. In between matches, I share similar interests with other Tetris players, making conversation a lot easier. With Rogue Company, I think that Switch to Decaf, PlayerTwoStart, and I do a great job of playing well enough, providing play-by-play commentary on our actions, and carrying a great conversation about anything that comes up. I couldn’t perform nearly as well in a game like Dark Souls where I’m flat-out awful at the subject matter.

Running the calculus on Twitch game selection is important to me, but it does have its limits. I could min/max my presence by only streaming Tetris 99 or Rogue Company, but I don’t want to play those games all the time. I also want to give myself the freedom to create what I want, even at the cost of lower viewership.

Many of my content creation goals have nothing to do with analytics. Some are as straightforward as me wanting to share a non-gaming related anecdote. Some are as elaborate as creating a multi-camera streaming rig and hosting a great board game stream. Other times, I just want to do stuff for the heck of it. Inviting other streamers to my channel to discuss ice cream isn’t exactly a top-tier strategy for drawing viewers, but damn it I wanted to talk about ice cream with my friends on stream. So we did just that, and it was awesome.

Whatever I decide to do on stream, it’s more of a process than just playing what I feel like. I like it better that way. I can focus on making my best content that has the best chance of pleasing existing and new viewers. For games that may not work as well on stream, I can cover them in other ways, such as VODs or written posts. Or when I’m in the mood, I might just stream them anyway.

Separating gaming and streaming in my mind as two different thing has been the perspective shift I need. I can play game during my own time without having to stress out about entertaining an audience. I can also stream and focus on creating great content without having to worry about my game selection holding me back.

For those who stream, how do you define the relationship between playing video games and streaming?