Not every game in Clubhouse Games: 51 Worldwide Classics is a bop. Shooting Gallery is marred by terrible motion controls that need to be reset every few seconds. Toy Boxing largely boils down to being a button-masher. And the card game War is never fun in any form.

Even so, the good outweigh the bad by a solid margin. Within that “good” pile also exist of a few faves that I keep coming back to. When I boot up Nintendo’s latest compilation, these are my go-to games!

END_OF_DOCUMENT_TOKEN_TO_BE_REPLACED

Steff and I’s ongoing Yahtzee battle spills onto the stream! Will our relationship recover after all of the shade thrown and salt generated in Clubhouse Games: 51 Worldwide Classics? As we threw dice, we also discuss what flavours of ice cream are the best. Which flavour is your favourite?

END_OF_DOCUMENT_TOKEN_TO_BE_REPLACED

After many hours of Stardew Valley, I wind down the night with Yacht Dice, 6-Ball Puzzle, and Mancala in Clubhouse Games: 51 Worldwide Classics!

END_OF_DOCUMENT_TOKEN_TO_BE_REPLACED 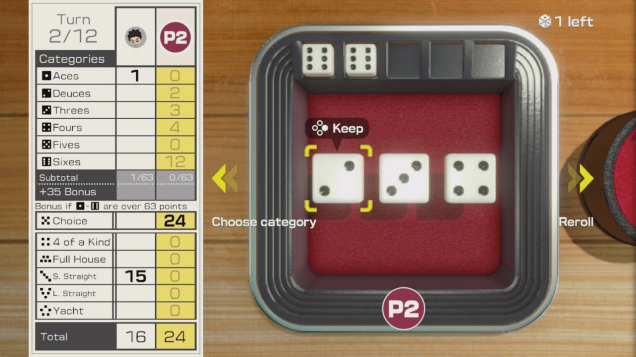 “The millionaire, the mansion, the yacht!”

Quoting the late Notorious B.I.G. as I shook my dice, I was two fives short of scoring a five-of-a-kind. Doing so would net me a whopping 50 points; easily the single largest point opportunity in the game. Though I’ve yelled the Biggie quote dozens of times with no luck, it finally paid off on this final throw. Five-in-a-row. 50 points. Jett wins.

Despite the immediate salt, my wife Steff calls for another rematch. We were already hours deep into this extended Yacht Dice session and would end up playing many more. I may have never discovered how fun Yacht Dice (better known as Yahtzee outside of the game) is had it not been for a series of events that led to me picking up Clubhouse Games: 51 Worldwide Classics.