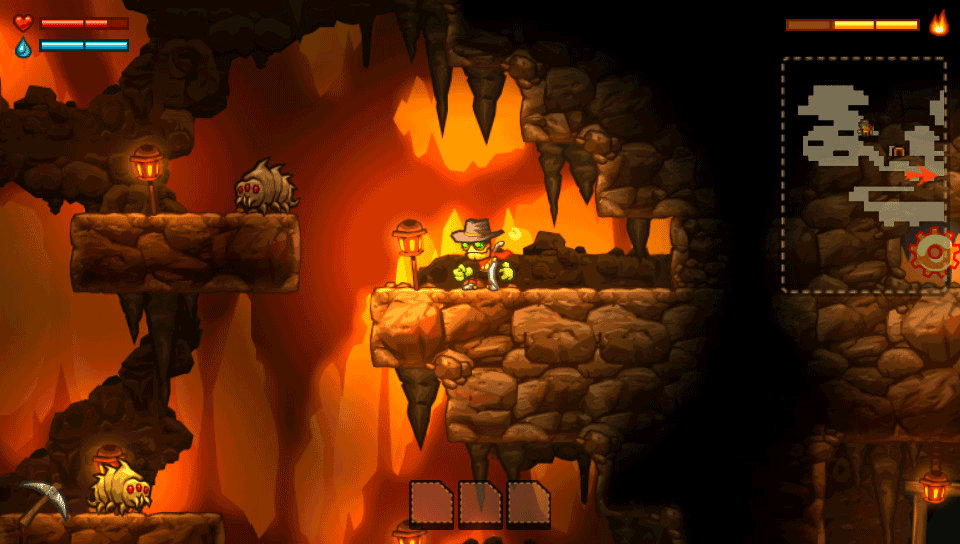 Having just purchased a Humble Bundle, my friend JJ found himself with an extra copy of SteamWorld Dig on the Nintendo 3DS. He was gracious enough to offer me the code. Then I forgot a out it for awhile.

Eventually, I found myself sitting on a train to Montreal with nothing to do. Firing up SteamWorld Dig for the first time, time melted away as I tore through their brilliant take on the Metroidvania genre. As the train pulled into Montreal, I was actually mad that I didn’t have a few extra minutes to wrap things up.

Thus began my love affair with Image & Form, the brilliant minds behind the SteamWorld series.

When I play an Image & Form game, there are two defining factors that keep me hooked on their games. One, art direction. Bright and colourful, their games are full of life even if every character is a robot. Bonus points for the detail in their character animations, as they move with a marionette-like quality to them.

More importantly, their game design is impeccable. Both SteamWorld Dig games are incredible examples of the Metroidvania genre at its finest. SteamWorld Heist is an amazing turn-based strategy RPG that gives players a lot of freedom to take on challenges with whatever character and weapon combinations you’d like.

Right now, I’m obsessing over SteamWorld Quest. Using the JRPG as a template but adding in combat mechanics from a deck-building card game, it plays like a dream while giving players so many options to take on each fight. If you really want to get particular, you can customize your decks before every single encounter in order maximize your efficiency. Even if you’ve never played anything quite like this, it’s designed in such a way that it’s easy to pick up.

Though I’m not quite done SteamWorld Quest, I think Image & Form is 4-for-4 when it comes to delivering quality games. I greatly appreciate their design ethos of creating games with airtight mechanics while still giving players a lot of room to take multiple approaches to the same challenges. At this point, I’m willing to try everything that this studio makes with a belief that whatever comes next is going to be great. Fingers crossed that they continue this hot streak!