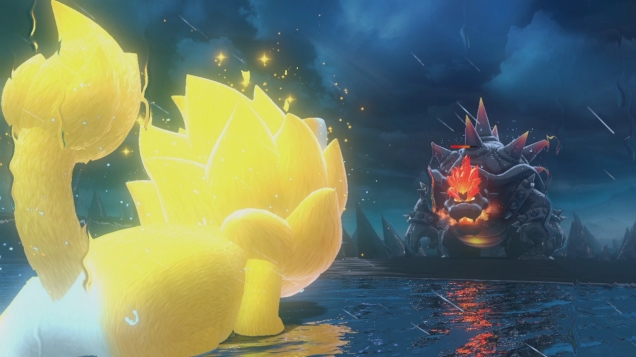 Bowser’s Fury is odd. Despite being packed in with Super Mario 3D World on the Nintendo Switch, Bowser’s Fury shares little relation beyond its protagonist and antagonist. Gone is the four-player co-op and linear level design. Heck, Bowser’s Fury doesn’t quite fit with anything in the Super Mario universe…and that’s what makes it fascinating.

Minding his own business in the Mushroom Kingdom, Mario finds a mysterious trail of paint on the ground. Rushing to its source, it leads to a puddle with the Shadow Mario symbol that teleports our portly plumber to Lake Lapcat. There, he finds a flustered Bowser Jr., who needs your help in clearing the black paint off of Bowser. Once Mario agrees to help out, you embark on a new type of Super Mario experience.

Lake Lapcat is Mario’s first truly open world experience. There is no hub world or menus to navigate that take you to different areas. Everything you will experience is contained within this one massive space that is gradually opened further as you collect more Cat Shines. You’re free to bounce around between islands and gather these collectibles in any order, so long as that area is unlocked.

Admittedly, it was a bit jarring at first. I wasn’t quite sure where to go or what the game wanted me to do. Early on, it didn’t punish me for that. The Cat Shine thresholds were low enough that I was able to unlock stuff while aimlessly running around. Now that I have a better understanding of how the game is structured, I can better focus my efforts on gathering Cat Shines in areas I missed.

Having everything contained in one space made for an interesting change of space. Eliminating the hub world also took out the downtime between gameplay bits, allowing me to progress without skipping a beat.

But this approach definitely has its downsides, at least in its current execution. Bowser’s Fury lacks a clear sense of place. As much as Nintendo dresses up Lake Lapcat with cat-shaped enemies and shrubbery, the environment as a whole is an empty void where Wipeout-style obstacle courses spring up from the water as needed. While levels in Super Mario games have always been just obstacle courses for Mario to run through, it’s never felt more overt than it does right here.

Then there’s the Bowser part. Corrupted by paint, this super-sized iteration of King Koopa will periodically spawn into the world in order to terrorize Mario by adding obstacles, raining fireballs, and breathing fire directly at him. Most of the time, you shoo Bowser away by collecting a Cat Shine. During some moments, you can turn into a super-sized Cat Suit Mario and fight Bowser head-on. Save for the parts where you use his fire breath to break otherwise unbreakable blocks to reveal secrets, Bowser’s involvement in this experience is more of a repetitive annoyance than anything else.

Even if you took the Bowser parts out, I’m not entirely sure how you stretch this experience out to the length of a standard Super Mario game. As of writing, I haven’t seen everything it has to offer. That said, I think that this formula in its current form would wear thin much faster than your standard Super Mario title by virtue of the game’s lack of scenic changes and gameplay variety.

For a company that oftentimes prides itself in only releasing games when they’re complete, Bowser’s Fury is a rare instance of Nintendo releasing something to the public that’s only half-baked. It makes for a fascinating proof-of-concept, but it probably couldn’t scale up to a standalone game by just adding more Cat Shines. At this junction, it’s overly-repetitive despite being a pretty short experience. Since it’s just pack-in with Super Mario 3D World, it’s a lot easier for Nintendo to use this as a demo of sorts to see how players respond to this format.