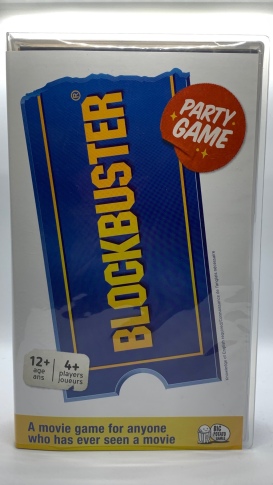 For a younger generation, the box pictured above means absolutely nothing. For the rest of us old folk, its nostalgia is undeniable. Long before the advent of Netflix, we went to video rental stores like Blockbuster to rent movies in VHS format.

When my wife Steff and I first saw this box on the shelf, we immediately did a double take. No, this isn’t a remnant from the past. It’s the box for a new tabletop party game featuring the Blockbuster brand.

As one would expect, the Blockbuster Party Game is about movies. Players will break up into two teams in hopes of collecting at least one movie in every category first. You’ll do this by successfully naming movies based on what the cards are looking for.

The action is broken up into two rounds. Round one features a head-to-head duel between one representative from each team. The top card in the Head-to-Head deck and players take turns naming movies that fit the category, such as movies with a dragon. The loser of this round is determined by the first player that fails to name a movie in time.

It’s in your team’s best interest to win the Head-to-Head, as it gives you quite the advantage going into round two. In this phase, each team will take turns identifying movies through clues from the player who just participated in the Head-to-Head. The winner of the previous round will draw six movie cards and distribute them across the board for both teams. One at a time, each team attempts to identify each movie based on one of three clues: one word, quote (real or made up), or act it. If you get all three right with time remaining, you get the opportunity to steal your opponent’s movies.

Duplicates can be a challenge, but thankfully there’s a rule for that. Collect three of a kind and you can cash them in to steal one from your opponents’s stash. You’ll repeat these two rounds until one team has at least one movie from all eight categories.

Blockbuster Party Game does a solid job of providing a framework for answering questions. Simply identifying movies by one word, one quote, or acting it out has been done many times over. However, forcing players to use one clue type per card adds a bit of strategy, as you may feel more comfortable using certain clue types for certain movies.

Categorizing movies by clue type also extends the game’s shelf life a bit. The game comes with a few hundred movie cards, but the possibilities triple by having to figure it out across three different methods. You’ll probably burn through the Head-to-Head cards much more quickly. 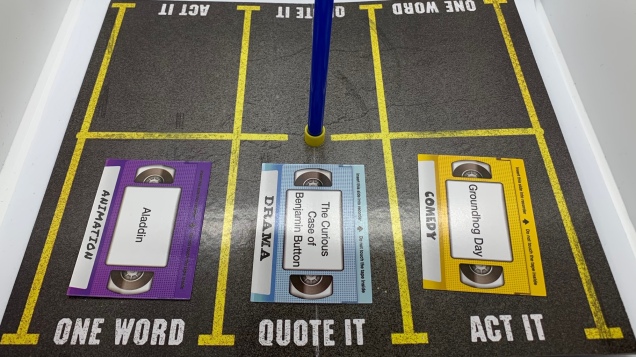 Blockbuster Party Game fits the bill as something to enjoy with a larger group while geeking out about the movies of yesteryear. Having a lot of movie knowledge helps tremendously, but even a cursory knowledge of popular films from the last century should be enough to get by. It’s not going to wow anyone with any sort of revolutionary game mechanics, but the framework here does enough to keep things interesting. Though there’s only one store left and you probably live nowhere near it, you can still turn your next game night into a Blockbuster night with this party game.

Hoping that more women’s clothes get blessed with pockets like these
🚨STREAM HYPE!🚨
Sunday vibes
#airhornx3! Squadding up with @playertwostart , @switch_to_decaf, @qowface, and MacGyverisms for 6v6 Rogue Company! Come through!
Can we get Professor Oak back?
Hope the homies don’t expose me for this