One of my favourite non-gaming corners of Twitch to visit is the music section. From musicians showcasing their talents, to producers talking shop about the creative process, to DJ sets that give me something to listen to for extended sessions, there’s a lot of entertainment to be had here.

I also think there’s a lot that we as game streamers can learn from music streamers, even if we don’t have a musical bone in our bodies.

Create a space that people want to be in

In the realm of music Twitch, streamers generally take their spaces more seriously. DJ streamers will oftentimes use green screens to add video that compliments the music they’re playing and the overall vibe of the stream.

FLPGame is primarily a game streamer, but he leverages his green screen for more than just superimposing himself overtop of his gameplay. He bookends every stream with a musical performance where he frequently puts himself in different scenes, from performing in front of a large crowd, to driving a sports car, to flying in a helicopter. What visual spaces can you take your viewers to with your green screen and a bit of ingenuity?

No green screen? No problem! Decorating your space doesn’t have to be an expensive endeavour. Cheap RGB lights, tinsel foil curtains, posters, games, albums, or any other decor can make your stream a more inviting place to stay. You don’t need to break the bank on Nanoleaf lights or anything like that, but making any effort to create an inviting space will help your cause. 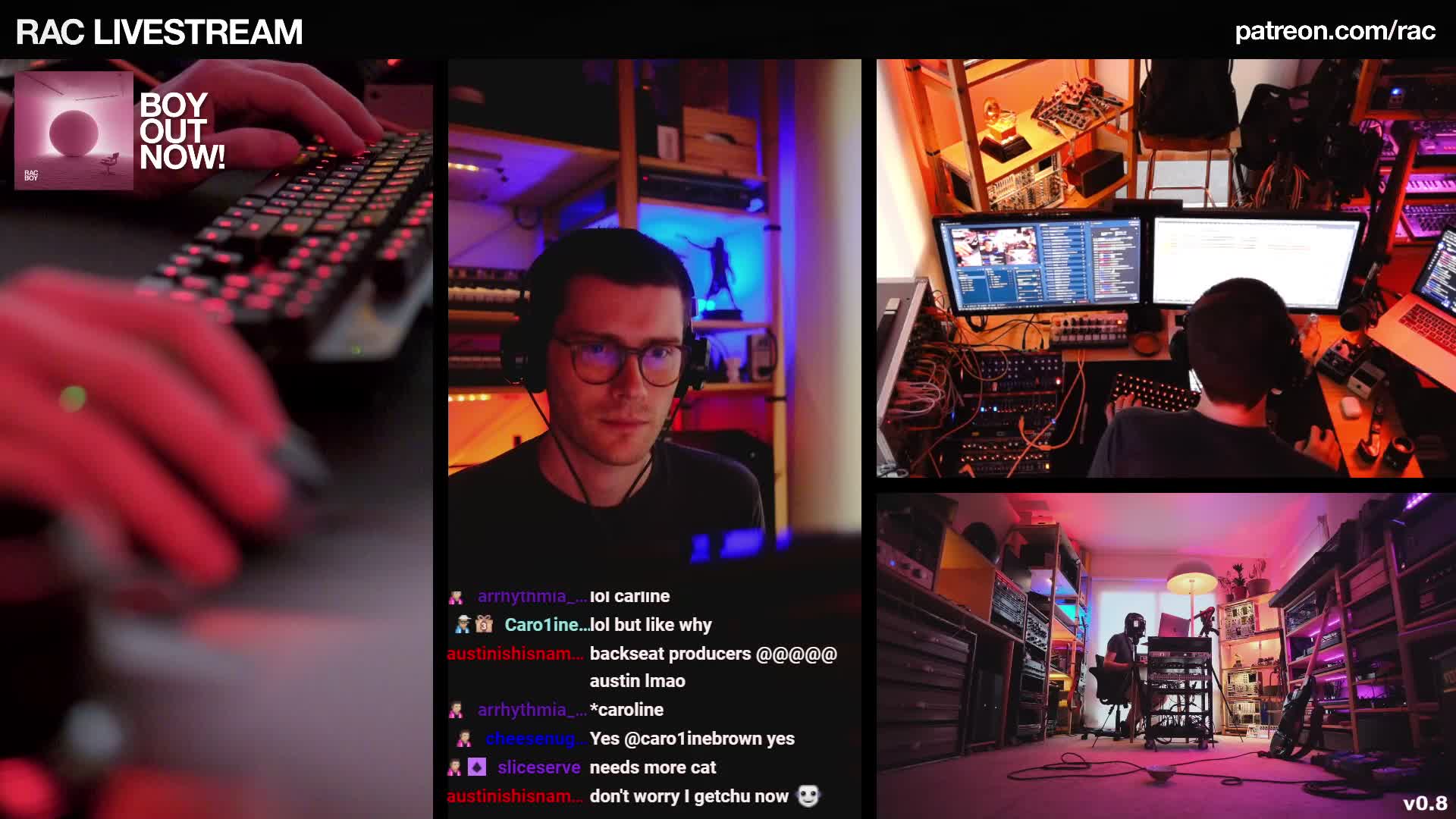 While many game streamers agonize over whether to use a camera at all, many music streamers on Twitch leverage multiple cameras to great effect. Having extra cameras further brings viewers into your world by giving them more perspectives on the action.

One notable example on this front is RAC. Using four cameras at once, he has one pointed at his face, one at his hands, one behind his head, and one on the floor pointing towards his desk. Arranging them in a clean overlay, he provides a thorough look at his space to the point where it feels like you’re there.

Another example is DJ Sian. Using multiple cameras, he switches between a view that shows him face-on and another focusing on their hands up close.

I make use of multiple cameras in largely the same way. My collage view was directly inspired by RAC‘s overlay, which gives viewers a simultaneous view of my face, my space, and my buddy Snorlax.

I also use secondary cameras to capture things that my main camera can’t. On a past stream, I showcased a gigantic bag of popcorn my wife and I bought at Costco. Thanks to my room cam that’s mounted on a shelf behind me, the zoomed out view gave viewers a much better sense of how big this bag of popcorn actually was.

I used to use my mobile cam that’s mounted to my side as just a secondary camera, but it now severs a more important purpose. Since it features auto-focus, I’m able to show games, Pokemon cards, and other objects on screen clearly. Also, when cropped vertically during extended chatting segments, this angle showcasing my entire upper-body and my room from a unique. This makes for content that’s more interesting to look at on a phone vs. the neck up view from my main camera.

Think about all of the ways in which adding more cameras can improve your content. Maybe you can use it to showcase your hands as you play an intense action game? Maybe it’s an opportunity to better showcase all of the cool decor in your room? Maybe you’ve got an even larger bag of popcorn than me? Whatever the case, having more cameras gives you more opportunities to create great content by giving viewers more perspectives on the action.

Have a webcam but don’t want to spring for a second camera? You already have one. With the use of an app such as EpocCam, you can use your phone as a second camera. I regularly use my phone as a secondary camera and highly recommend trying it out in your setup! The screenshot above is an example of what my phone looks like as a webcam using EpocCam and it looks better than my Logitech Brio, which I use as my main camera.

Use effects to amplify emotions

Music streamers don’t always have the slickest overlays, but a number of them leverage their streaming software in ways that add more to their content than any flashy donation widgets will. For example, when Kenny Beats has something very important to say, he triggers a “breaking news” effect with news tickers, music you’d hear in a local news broadcast, and he changes his delivery to sound more like a reporter. 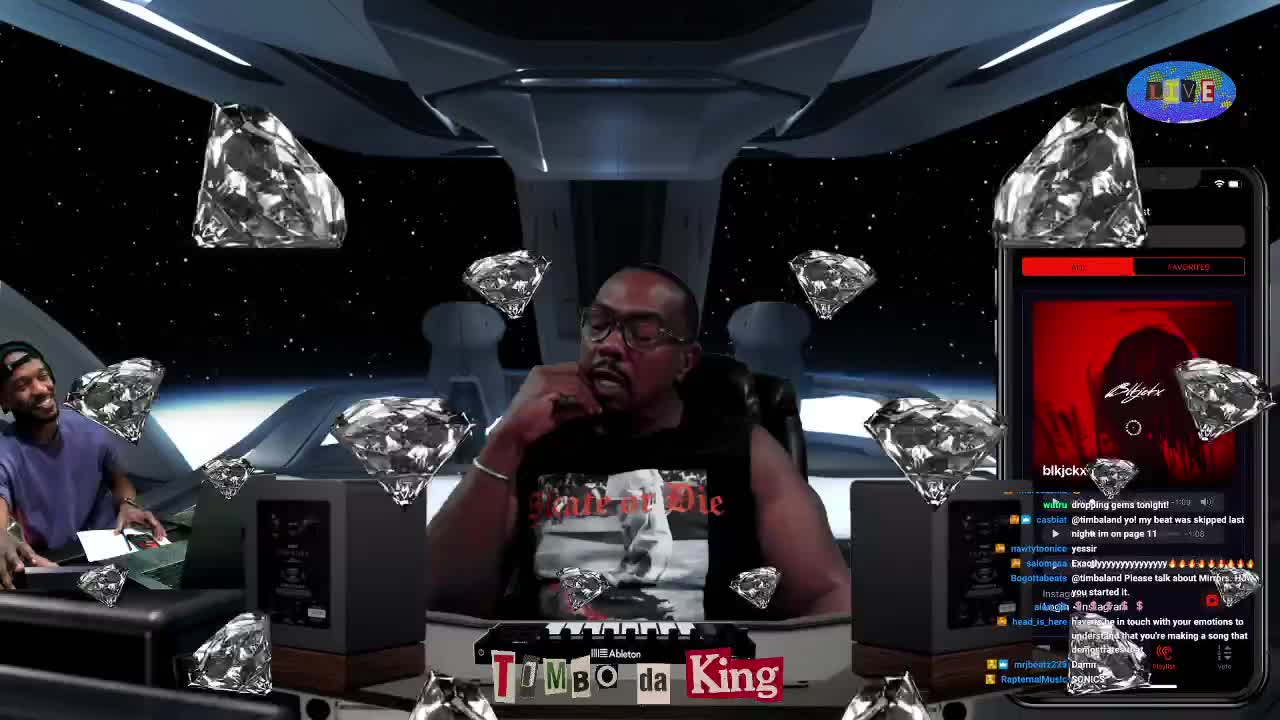 When Timbaland says something important, he amplifies this with an effect where gems fall from the sky.

You can do this too and you don’t need to be a hit music producer to do it! Most of the time, they’re just using free green screen effects from YouTube and then triggering them with keyboard hot keys or a stream controller like a Stream Deck.

When you’re thinking about what effects to incorporate, think of the emotions you want to amplify. When I win, we celebrate by dropping money from the sky and blasting up-tempo music. I also quickly switch between different scenes with my two cameras cropped in different ways to create the effect of many different camera angles.

When I say or do something incredibly profound, math equations swirl around me as the camera zooms into my face.

When I say or do something naughty, viewers oftentimes use channel points to blur out my camera.

Think about your production values in ways that go beyond having a camera and making sure that your mic sounds good. How can you leverage your streaming technology to make your content better? Again, this doesn’t have to be an expensive endeavour or require you to learn a bunch of new skills. With a a few green screen effects, OBS plugins, and some imagination, you can underscore every on-screen emotion with a bit more flair.

Gaming is one of the most saturated spaces for content creators across any medium. This is especially true in the world of streaming, where gaming led the way over a decade ago. When we stream gaming-related content, we’re literally up against millions of other streamers.

Meanwhile, music is still in its infancy when it comes to live streaming. There’s a lot less competition and a lot more opportunities for streamers to build an audience.

While I’m not suggesting that you go learn how to play an instrument in order to succeed on Twitch, I am saying that you should really try your hand at expanding the scope of your content beyond playing video games. Being able to offer more than just pressing buttons makes your content that much more valuable.

One of my favourite examples of this is Fareeha. I first discovered her stream when she was playing Overwatch. However, she plays a number of different games and does a variety of different types of content. I have seen her cook food. I have also seen her showcase her incredible singing and piano playing skills. Gaming content is still her main hustle, but she does other activities to add variety and value to her overall content offering.

One of the easiest things you can do to separate yourself from the pack is to take time to just chat. Doesn’t even have to be about video games. Just have a conversation with your audience about anything. It’s an opportunity for you to build a tighter bond with your audience while showcasing great aspects of yourself that don’t come out while you’re busy pressing buttons.

Though I am not a talented spray paint artist, my spray paint streams are some of the most fun ones to do. Not only does it bring my channel to a new audience, but it gives my existing audience more types of content to experience. Bringing them into this process also allows them to provide input and be part of that creative experience, much in the same way that music streamers accept requests for songs or use chat interactions to inspire their current projects.

Even if you want your content to primarily focus around gaming, it only helps your cause to try other forms of content. Whether you host entire streams dedicated to a different subject or you take an intermission to try something else, showcasing your other interests and talents gives viewers more reason to tune in.

Make an active effort to entertain* your audience

Music is in many ways, is a performance art. Whether you sing, play a guitar, or DJ, you’re partaking in those activities so that others can garner enjoyment from your efforts. Music creators tend to approach streaming in the same way they approach their music: they aim to entertain an audience.

Most gamers don’t approach streaming in that way. They go live, play video games, and assume that the world will tune in with a vested interest in their in-game exploits. Unless you’re a literal pro or you’re playing or you’re approaching the games you play in a very unique way, watching you play video games isn’t all that entertaining. At the very least, the gameplay in-and-of itself isn’t that remarkable relative to the millions of other players playing the same games as you at a similar – if not higher level than you.

You have to find a way to provide value that’s more than just watching you play video games. Being entertaining is one way of doing it, but not the only way. You can provide educational value, such as providing tips on how others can get better at the game you’re playing. You can provide motivational value by inspiring others to pursue their dreams. You can provide relational value by actively engaging with your chat. Odds are, your value proposition is some mix of all of these tenets of value.

Whatever the value is that you provide, you have to make an active effort to create a stream that provides value to your audience. What can you do to entertain, educate, motivate, and engage?

Whether you take inspiration from music Twitch or any other community, observing how other streamers approach the subject can help you improve your stream. Watch closely and make note of what others are doing that help them achieve the success you want. Again, you don’t necessarily have to learn an new instrument in order to grow your Twitch channel, but there are things that music streamers are doing with their broadcasts that could lead to your next step towards success!