Video game dodgeball has existed since the 80s with the likes of Super Dodge Ball. As a whole though, dodgeball is an underutilized concept. Maybe other game designers didn’t want to step on the toes of the Kunio-Kun universe. Maybe they just didn’t have any ideas to expand on the core concept of hitting people in the face with balls.

Played from a third-person perspective, these dodgeball matches aren’t confined to the gym. From a construction yard with a giant swinging wrecking ball, to a train station with trains that can run players over, the battlefield feels like a shooter deathmatch stage with even crazier set pieces.

Though the game has a number of different modes and is gradually rotating modes in-and-out, all of the ones we’ve seen so far are slight variations of team deathmatch. Every character has two hearts. Each time a player gets hit, they lose a heart. Lose both hearts and that character dies, giving the other team a point. Reach 10 points and your team wins. I wish the game would incorporate more objective-based modes, but those might be coming in the future. Its main deathmatch modes are still fun for extended stretches, but more variety would be greatly appreciated.

Other aspects of the game are also heightened. Not bound to the same laws of gravity, your character can double jump and whip out a glider to coast long distances. When it comes to throwing, your characters can throw the ball at blistering speeds, curl shots around walls, and arch shots over walls. Rarer special balls are also included in the mix, from Sniper Balls that are almost impossible to catch but take time to charge, to a Bomb Ball that explodes and causes area-of-effect damage. Your character can even roll into a ball and have your teammate throw you for a one-hit kill if it connects!

It functions like a shooter and certainly scratches some of that itch. Running around the map and landing shots can be incredibly satisfying once you get a feel for the game’s throwing mechanics. But what excites me most is in the ways that it feels different from a shooter. 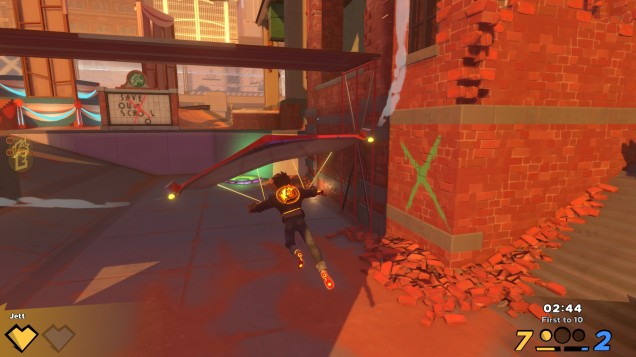 With your characters being so mobile and the maps having lots of verticality and obstacles, moving around the map almost feels more like a 3D platformer. Better yet, its combat mechanics have shades of depth that are akin to a fighting game. Though aiming is simplified thanks to a generous lock-on feature, you can still land tricky shots by curling balls around walls, arching them over walls, or varying the speed of your throws. You can also pump fake your throws in order to bait your opponent into overcommitting on a defensive option and striking them with a swift throw as they recover.

If you’re on the wrong side of the ball, you’re not a sitting duck. Running behind cover might be enough to evade the ball’s homing capabilities. You can shoulder bash the thrower if you’re close enough, which causes the ball to pop out of their hands. Best of all, you can catch a throw. Now you’re the aggressor and can strike right back. If you time the catch just right, not only does it charge up the ball for an even faster shot, but you immediately recover and can perform another action. Even if three balls are thrown at you at the same time, you can catch all three if you nail the timing.

Every encounter has the potential to be a dodgeball ballet of air jumps, pump fakes, throws, catches, and counters until someone finally gets hit. Once you get a hang of your options in any given moment, fights are incredibly exiting and can feel unique each time.

And that’s before you factor in your teammates. Together, you can pass the ball between each other for a charge boost. One can act as a decoy while another attacks from behind. Multiple balls can be thrown at an enemy at the same time, which can be very difficult to counter. One person can launch an enemy in the air with a shoulder charge while the other skeet shoots them out of the sky while they’re stunned. You can even launch your teammates as a ball or as a super-charged bomb that will kill anyone in range.

While the game plays well enough in solo queue, you’ll really unlock the game’s potential with a full squad. Being able to communicate on the fly and leverage all of the team-based tactics available can really put you ahead of the competition. That said, being on the wrong end of a three-stack can be awful if your rando teammates can’t keep up or aren’t willing to coordinate. In a worst-case scenario, there’s usually a 1v1 mode that’s surprisingly cool, too.

Speaking of matchmaking, I did run into a rare glitch where entering a game mid-match wouldn’t actually let me play, I would be stuck in the matchmaking screen while still being able to hear the match carry on without me. Didn’t happen often, but I hope that kink is resolved sooner rather than later.

As of writing, I played both the PC and Switch versions of Knockout City. Thankfully, the game has cross-play and cross-progression. Unfortunately, it’s not cross-buy. I bought the PC version and am kicking around the idea of buying it on Switch as well. Having the ability to play it portably sounds mighty appealing.

By default, the Switch version runs at 30fps, but you can run the game in its performance mode to unlock a mostly-steady 60fps. Even though the overall look of the game takes a hit in performance mode, I much preferred playing the game with it on for more frames. I understand that the Switch isn’t the most powerful console, but having the ability to choose between fidelity or fluidity is a great addition.

Though I’m far from a dodgeball video game connoisseur, I think it’s safe to say that Knockout City is the best dodgeball game ever made. More importantly, it’s unique blend of action feels makes it a unique proposition in a market saturated with competitive multiplayer games. If you’re interested at all, you can play the game for free up until you hit level 25. If you’d like to continue, the game has a modest $20 USD price tag, which feels fair for what the game has to offer. Take the next trip down to Knockout City when you get the chance!

#airhornx3! Tetris time! Come on over!
Kobe #darts #lawndarts #dart #tricks #trickshots #outdoors #summer #summertime #summerfun
🪓
Would you enjoy a pickle pizza? #food #pickles #snacks #pizza #pickle #delicious #gross #foodie
Knockout City is an awesome game and is still free to try up to level 25! Maybe this is the weekend to jump in!
Top 3 showdown!