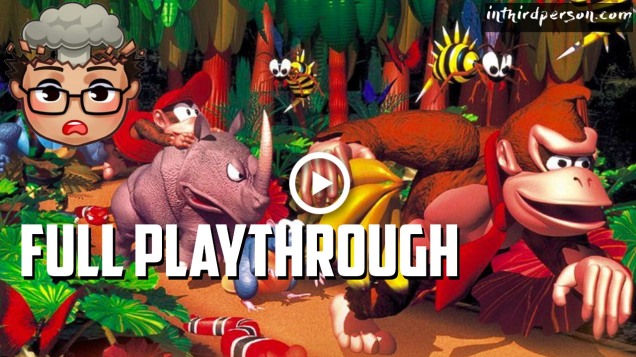 Fasten your mine cart seatbelts! We play through the entirety of Donkey Kong Country and it put up more of a fight than I thought going in!

END_OF_DOCUMENT_TOKEN_TO_BE_REPLACED

Donkey Kong Country! Super Mario World! Shaq-Fu? Take a look at some of the hits and misses in my Super Nintendo game collection while we share stories of retro gaming awesomeness!

END_OF_DOCUMENT_TOKEN_TO_BE_REPLACED

Working my way through the first two worlds of Rare’s legendary platformer!

In the summer of 1994, I received an unusual package from Nintendo. Just a few months before, they had sent me a copy of Super Mario All-Stars as part of a promo for buying an SNES. This wasn’t a game, though. Inside, was a VHS tape about the upcoming Donkey Kong Country. Though I didn’t know about it before watching the video, I knew that game like the back of my hand long before it was inevitably released later that year.

END_OF_DOCUMENT_TOKEN_TO_BE_REPLACED

Friend of In Third Person, The Greatest Bits, is back! In my interview with him, he mentioned that he was working on a Donkey Kong Country remix album. Just a few months later, it’s out!

END_OF_DOCUMENT_TOKEN_TO_BE_REPLACED

Merry Christmas to you and yours. As a video game blog, I hope you found every game you wanted under the tree this year and that you provided your friends and loved ones with the gift of game as well. Between my brother and I, we received a bunch of games that I can’t wait to dig into. Hopefully with my week off at work I can actually make a dent in them!

Having listened to the latest episode of the Joystiq podcast where they read and play clips of Joystiq readers share their favourite Christmas memories, I thought I would share one of mine with you.