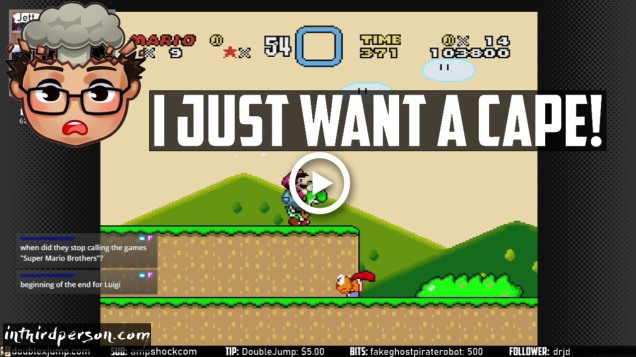 With my 3-year-old “nephew” tuning in, we decided to play a little bit of Super Mario World for him! I embarrass myself by being completely unable to get a cape, and I struggle to explain where Yoshi disappeared to after I jumped off his back to reach the final platform. Apologies for the conflicting music. Will remember to shut off the lo-fi beats for games where I want to play the music!

END_OF_DOCUMENT_TOKEN_TO_BE_REPLACED

Donkey Kong Country! Super Mario World! Shaq-Fu? Take a look at some of the hits and misses in my Super Nintendo game collection while we share stories of retro gaming awesomeness!

We begin our journey through the Super NES Classic with one of the crown jewels in the Super Mario series!

In this 10-part series, I’ll highlight three games that I would like to see in a hypothetical SNES Classic. Let’s begin!

END_OF_DOCUMENT_TOKEN_TO_BE_REPLACED

Super Mario World has a deceptively amazing soundtrack. I don’t know if you ever noticed this, but that game basically has one song that’s repeatedly re-imagined throughout. By changing the tempo, instrumentation and bits of the melody here and there, Koji Kondo created a varied, yet wonderfully cohesive soundscape for my all-time favourite Super Mario game. I didn’t pick up on this until many years later, though there’s one audio cue that caught my ear immediately. Whenever Yoshi was on screen, he was accompanied by a sweet bongo arrangement. Those bongos in my mind became synonymous with the awesome that Yoshi brought to the table.