Underneath the veneer of fantastical dodgeball, Knockout City is a team deathmatch shooter. Players roam around an enclosed space, hitting each other with projectiles to score points.

In practice, Knockout City feels very different from a traditional shooter. Not because you’re hurling dodgeballs instead of firing bullets. Its unique feel is derived from the absence of a core tenet of shooter design: aiming.

We all know what aiming is like in video games. Whether you’re playing Call of Duty or Pokemon Snap, you aim the reticle at your target and shoot. While console-based shooters grant players with a bit of aim-assist, the onus is on the player to point the cursor where it needs to be in order to hit your target.

Knockout City largely removes skill-based aiming from its mix. As soon as you wind up your throw, the game’s generous auto lock-on will snap to basically anyone in your view. Also, once you throw the ball, most balls in the game have some homing capabilities, allowing for shots to curl a bit in order to strike your target.

This is not the first shooter-like game to eschew shooting. Metroid Prime is a…prime example of this (sorry). Though its technically a first-person shooter, its lock-on feature de-prioritizes the importance of aiming. Splatoon is another shooter where the importance of aiming is minimized. Sure, being able to down your enemies helps a lot, but your fundamental objective is to cover as much of the ground with paint as you can. With the primary target being basically impossible to miss, it’s nearly as important to have crack aim.

In both of those games, minimizing the role of aiming allowed for other gameplay elements to shine within their shooter frameworks. Metroid Prime focused more on exploration and platforming. Splatoon focused more on area control.

By de-emphasizing aiming in Knockout City, the game shifts its focus towards movement and timing. Characters in this dodgeball game are afforded a ton of mobility options from sprinting, gliding, dashing, and the ability to jump multiple times in the air while shifting directions. You will need all of these mobility options to dodge homing balls or to gain a positional advantage.

If a ball is flung your way, you can also attempt to catch it. Press the catch button at just the right time and you’ll snag the ball before it smacks you in the face. If you quickly launch it back, the ball will also be thrown at a speed that’s faster than you can normally throw. Between skilled players, this can lead to wild sequences where the ball is thrown and caught repeatedly until someone gets smacked with a throw that came out at lightning speed.

As the player with the ball, you can use all of those same maneuvers to help you land shots. You can’t catch balls if they’re not in your field-of-view, making shots from above, below, or behind quite advantageous. Also, there are ways of baiting your opponent to overcommit to a defensive option.

For example, the thrower has the ability to pump fake their throw. If the opponent dashes or attempts to catch prematurely, they’re now vulnerable to an actual throw. Even just standing in view and holding the ball can be tense, as you can throw the ball at an unusual time to catch them sleeping.

You can also vary your throw speed based on how long you hold the throw button down. I generally like to throw at the maximum velocity, but there is value in throwing at slower speeds. In a close-quarter scramble, simply chucking the ball at your enemy as soon as you can may work if they’re not in position to counter. Also, sometimes slower throws can cause your enemy to attempt a catch too early, causing them to eat a ball to the face during their recovery.

The more I explore the game’s systems, the more I’m enjoying it. The ways in which all of your movement and throwing options interact with one another constantly create fascinating scenarios. Right now, I’m really focused on developing my feel for catching rebounds. It’s totally possible to hit someone with a ball, catch the ball in the air after it’s bounced off your opponent, and throw it at them again to down them before you even hit the ground. When other players are involved in a skirmish, the possibilities expand even further. 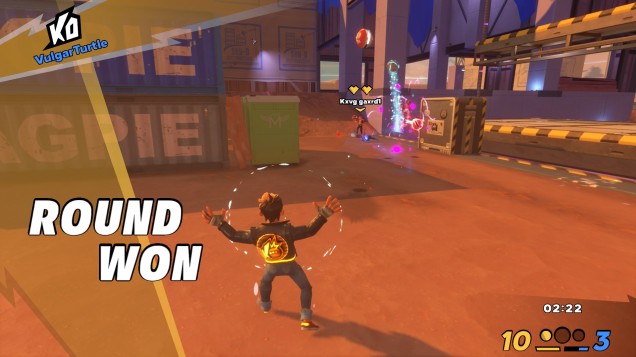 Knockout City uses the template of a shooter, but feels very different in execution. Your freeform mobility makes it feel like a 3D platformer and its myriad of defensive and offensive combat options gives it almost the feel of a fighting game. Landing hits is less about accuracy and more about making the right read or baiting your enemies into a position that’s advantageous to you.

Those adjustments to the core formula make it feel unique relative to anything else out there. They also make the game an appealing option to players who like the idea of competing in a shooter-style team deathmatch but struggle with aiming. If you’ve got experience with any 3D platformer, you can probably have a good time with Knockout City with little ramp-up time.

As of writing, the free trial is still happening and goes until May 30th, 12pm UTC. After that, you’ll have to pay $20 USD to own the game. I’ve already bought the base game on PC and look forward to many more hours in Knockout City. Would highly recommend you check it out before free trial runs out!