Pioneered by the likes of Wolfenstein 3D and Doom, the first-person shooter has grown to become one of the most popular genres in gaming. There’s something inherently visceral about viewing the world from the eyes of your character, as it puts you a step closer to the action.

END_OF_DOCUMENT_TOKEN_TO_BE_REPLACED

Battle royale! I join Mat and Liza for some Call of Duty: Black Ops 4 Blackout mode and make for a great meat shield! Side note: Liza for MVP!

The Nicest Call of Duty Player Ever

Taking One for the Team

Liza Gets the Kill 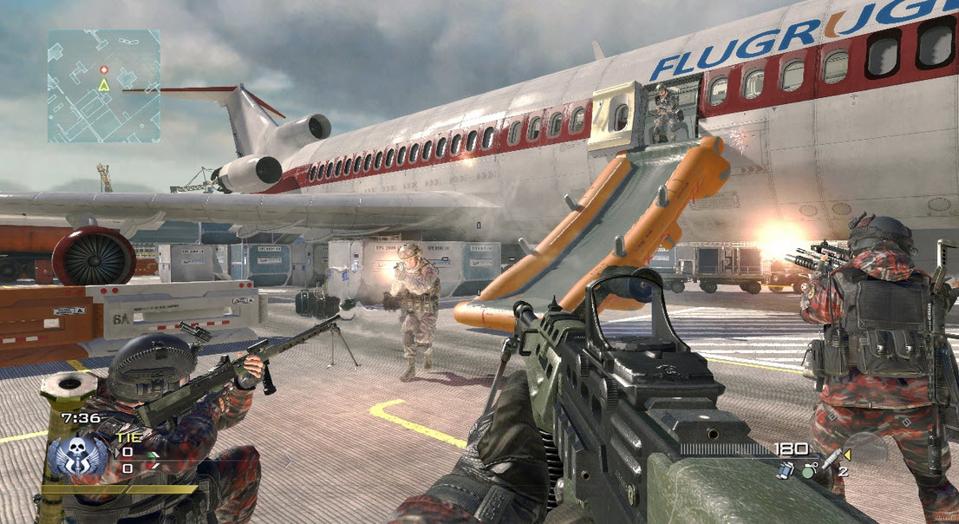 I lucked into the Call of Duty series many years ago when my mom won a Modern Warfare 2 Xbox 360 bundle at her work Christmas party. Not having any interest in the franchise until that point, that game won me over in a big way. Gorgeous graphics, a roller coaster ride of a single player campaign and wildly addictive multiplayer had me hooked. I went backwards to experience the original Modern Warfare as well as World at War, and kept up until Advanced Warfare.

As good as those games generally are, I don’t miss the series at all.

END_OF_DOCUMENT_TOKEN_TO_BE_REPLACED

Ever wonder what Call of Duty is like on the Wii U? Find out today!

A few days ago, I picked up Bulletstorm. It’s clear that the developers behind it really wanted to push the bounds of what a first-person shooter could be. Everything from the weapons, to the level designs, and the enemies themselves, have been tuned for you to pull off fancy juggle combos, and kills that would make Devil May Cry jealous. However, it’s also clear that their single player innovations don’t work within the context of traditional multiplayer deathmatch. Instead, the game offers its own version of horde mode that feels like a throwaway mode meant to to meet check multiplayer off as a feature on the back of the box.

Though the game was a critical hit, the it didn’t live up to sales expectations, and its sequel was shelved. Did Bulletstorm fail as a commercial product because of it’s de-emphasis on multiplayer?

END_OF_DOCUMENT_TOKEN_TO_BE_REPLACED

The late 2010 success of In Third Person continued into the new year. While my blog will never reach the heights of an IGN or Kotaku, In Third Person has grown from a site with a few dozen visitors a month to a few thousand, which is really damn good for a pet project I do in my spare time. If you keep visiting, I’ll keep writing!

January’s top posts are an interesting bunch. I don’t think any of these posts appeared the last time I wrote one of these top 5 wrap-ups. If you’d like to check out the most popular posts of January, read on!

END_OF_DOCUMENT_TOKEN_TO_BE_REPLACED

Let’s cut to the chase. You know I’ve been a good boy and you’re a generous guy. You know you want to leave me something nice under the Christmas tree, but I’m a terrible person to get gifts for. I have a bad habit of purchasing everything I want before anyone has a chance to give it to me.

It doesn’t have to be that difficult, especially with my help. If you click through to the rest of this post, I’ll give you a few suggestions.

END_OF_DOCUMENT_TOKEN_TO_BE_REPLACED

I’m not sure if Movemeber is an international movement, but it’s a really big thing in North America. Many men (and maybe women, I’m not discriminating) are growing moustaches to raise awareness for prostate cancer. I am not growing a moustache, because I do not have the facial hair follicles to grow anything that looks halfway respectable, but I will definitely donate to the cause at some point.

As a way of raising awareness to the cause, I thought it’d be cool to highlight some of gaming’s most definitive moustaches. This is far from a complete list, so I’d love to see what moustaches you think deserve recognition!

END_OF_DOCUMENT_TOKEN_TO_BE_REPLACED

Earlier this evening, I wanted to download something on XBOX Live while waiting for my turn in Super Street Fighter IV on PS3. I had them both going thanks to picture-in-picture. It was crazy to see that everyone on both of my friends list was playing Call of Duty: Black Ops.

END_OF_DOCUMENT_TOKEN_TO_BE_REPLACED

Even if Splatoon 3 isn’t coming out for a while, make sure to always stay fresh!
When was the last time you got burned by a video game?
Celeste plushies of Madeline and Badeline!? Yaaaaas! What video game plushies do you have?
#airhornx3! Mario/Luigi/Peach/Toad time! Let’s-a-go!
Pretty sure this wasn’t what Nintendo had in mind, but it worked! What outside-the-box solutions have you come up with to overcome a challenge?
lofi hip hop art to relax/study to