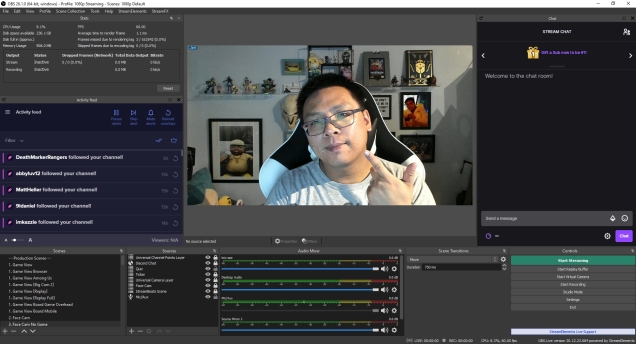 OBS is the go-to broadcasting software for streamers. It’s incredibly powerful and it’s free. If you don’t already have it, grab it here! Putting together your first stream isn’t that difficult, but you can really take your stream to the next level with a few tidbits of advice you may have missed along your journey.

Here are my top 10 tips for streaming like a pro in OBS!

Actually, there are 11 tips, but “top 10” works better for SEO purposes and #11 might be the most important tip of all. Let’s get to the tips!

END_OF_DOCUMENT_TOKEN_TO_BE_REPLACED

30 years ago, Capcom laid the groundwork for the greatest fighting game franchise of all-time. It’s my favourite fighting game series and one that continues to stay top-of-mind, even when it’s currently not in my rotation. Let’s count down my favourite characters in the series!

END_OF_DOCUMENT_TOKEN_TO_BE_REPLACED

In 2016, I released 181 posts. As much as I would like to see them all succeed equally, a handful of posts ultimately break away from the pack. If anything, that handful of posts end up accounting for a majority of this site’s traffic. This is in large part due to the Google spiders giving preferential positioning to certain things, though I ultimately can’t predict which posts will hit and which posts won’t.

No time for losers at the moment though, as this is the cream of the crop. The 10 most viewed posts released in 2016 on In Third Person along with one honourable mention that fell just short of the cut. Let’s get this show on the road!

END_OF_DOCUMENT_TOKEN_TO_BE_REPLACED

Street Fighter IV did way more than just provide me with a fun blast from the past. It marked the beginning of me falling deeper into a video game rabbit hole than I’d ever fell before.

END_OF_DOCUMENT_TOKEN_TO_BE_REPLACED

Rock Band at face value is the logical next step from Guitar Hero. With the inclusion of drums and vocals, it took a rather solitary experience and made it one of the biggest multiplayer phenomenons of this generation. As a franchise, Rock Band has set the standard that all rhythm games should aspire for. Based on its merits alone, this game would have made my list regardless. However, it appears so high up because of the life-changing impact its had on my life.

END_OF_DOCUMENT_TOKEN_TO_BE_REPLACED

Commander Shepard has the best of friends. While there are so many wonderful aspects to Mass Effect 2, from its great combat, to its wonderful story, this is a game that I feel is defined by the relationships you make with your crew.

END_OF_DOCUMENT_TOKEN_TO_BE_REPLACED

(Game of the Year Nod)

How often does a video game make you question your own humanity? The Walking Dead does throughout in brilliant fashion. At every turn, the game puts you in one terrible circumstance after the next, demanding that you make one gut-wrenching decision after another. By the end of its 5 episode run, I was moved to tears.

END_OF_DOCUMENT_TOKEN_TO_BE_REPLACED

For me, Borderlands was the ultimate ‘don’t know it til you try it’ game of the generation. Leading up to its release, nothing about it sounded like something I wanted to play. However, after all of the positive buzz, I figured that I should get around to it eventually for academic purposes. By the end of my 100-plus-hour run, I might as well have been rewarded with a Ph.D, as I explored every nook and cranny of that game.

END_OF_DOCUMENT_TOKEN_TO_BE_REPLACED

I’ll never forget my first foray into Rapture. Before the game came out, I hopped into the demo with no idea of what I was getting myself into. From the moment that bathysphere went underwater, I was hooked. Below the ocean was the world of Rapture; an underwater dystopia that was beautiful in a way I’d never seen in a video game before. Once inside, the story that unfolded rose to a dramatic crescendo…and stopped. When that promo screen enticing you to buy the full game appeared, I just had to have this game.
END_OF_DOCUMENT_TOKEN_TO_BE_REPLACED